Seasoned Timber is a gen Starsky and Hutch anthology.

The publisher's explanation of the title:

Wood that has been stressed and gone through several years of lashing rain and freezing cold becomes seasoned timber, proving that it can withstand the test of time and has the strength to outlast whatever Mother Nature can throw at it. Likewise is the bond and friendship between Starsky and Hutch. They've weathered every storm and have come out the other side stronger and better for it. These stories explore that friendship that may bend with the fierce wind, but will never break.

Some Discussion Regarding This Zine's Publisher

In May 2001, a Starsky & Hutch fan attempted to dissuade other fans from purchasing zines, "Seasoned Timber" in particular, from Agent With Style, citing the publisher's near-monopoly on zine publishing and status as a for-profit outfit. Other fans were dismayed at the suggestion that a fan would try to encourage other fans not to purchase fanworks. One reason cited was that "Agent With Style" was the only way they could get the scarce zines they wanted. Another reason was that not buying her zines would hurt the fans whose work appeared in them, that those stories would not get the readership they deserved. One fan said one of the high points as a fan was seeing her story in print, and the validation this provided.

In October 2004, a different fan recounted her powerful frustration about unauthorized changes that Mysti Frank had made to her story in "Seasoned Timber #3." She described how Mysti had made over 47 unapproved changes to her story [mainly adding epithets], putting in what the fan felt to be "clichés and awkward phrasing" into her story. Mysti, she said, agreed to add a vague errata to the zine, but the fan felt that this was a terrible solution, saying that it made the poor writing to be the fan's fault and that the fan would never know if fans were reading the version with the errata or the version without. The fan said she'd wished Mysti would have just put in an errata that said she'd made changes without the fan's consent. " I still think it's incredible that an editor would actually put cliches and awkward phrasing INTO a story, rather than take them out." [1] 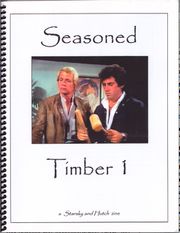 Seasoned Timber 1 was published in May 2001 and has 200 pages. There is no interior art. 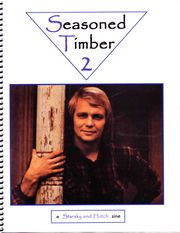 Seasoned Timber 2 was published in May 2002 and has 196 pages. It contains no interior art. 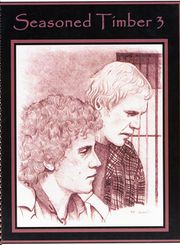 Seasoned Timber 3 was published in 2004 and has 239 pages. It contains no interior art. It is dedicated to the memory of Paula Wilshe.

Seasoned Timber 4 was published in August 2008 and has 150 pages. The front cover is by Suzan Lovett. It contains no interior art. 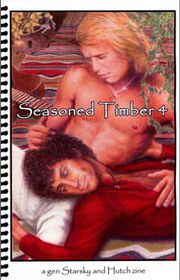 cover for issue #4, Suzan Lovett [yes, this is a gen zine]

Seasoned Timber 5 was published in August 2008, the same month as issue #4, and has 151 pages. The front cover is by Lorraine Brevig. It contains no interior art. 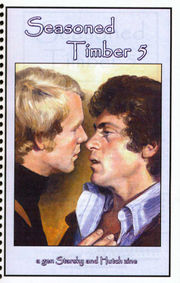 On the title page: "No bribes of someone to help with the database for the shopping cart were offered. Dammit. Laugh. Cry. Send LoCs!" The first part of this refers to a one-time plan by Agent With Style to revamp the sales site.