Sandor Clegane/Sansa Stark, also known as SanSan, is the het pairing of Sandor Clegane, aka The Hound, and Sansa Stark in the A Song of Ice and Fire and Game of Thrones fandoms.

She brings the light and he brings the darkness, and they help each other shift their perspectives closer to reality somewhere in the middle.thehound

At the beginning of the series Sandor is sworn sword to crown prince Joffrey Baratheon, Sansa's betrothed. After Sansa'a father is brandished a traitor and killed, Joffrey cruelly shows her his head on a spike. Sansa makes an attempt to kill Joffrey, but Sandor stops her. In the second season a riot breaks out in the streets and Sansa is separated from the royal party, three men attempt to rape her, but Sandor kills them and rescues Sansa. During the Battle of the Blackwater Sandor decides to leave King's Landing, he asks Sansa to come with him, but she refuses. 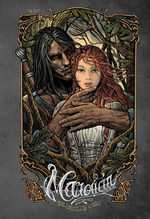