Russet Noon by Lady Sybilla is a novel-length work of fanfiction, a sequel to the Twilight series featuring Jacob (described as being "for Team Jacob"). Lady Sybilla attracted much criticism and mockery from fans and pro authors alike by her attempts to sell her fanfic. Due to the controversy, however, Lady Sybilla issued a public apology to Stephenie Meyer and has, since then, made her novel available for free on her blog, LadySybilla.com.

Summary of the novel

"It's Renesmee's fifth birthday, and the Quileutes have invited the Cullens to come to La Push to celebrate together. Even though Jacob is dying to see Nessie again, deep inside, he feels horribly conflicted. Nessie is only five in human years, but, because of her vampire genes, she already looks like a fully developed teenager, curves and all. While Jake finds comfort in his close friendship with Bella, his attraction to Nessie only fills him with guilt and shame. He struggles to play the big brother role, but just being around Nessie is getting to be too much of a temptation for him. He knows she's attracted to him, but Edward and his two vampire brothers, Emmett and Jasper, are way too overprotective of her and are constantly watching Jake's every move. Yet, as prickly as this situation may seem, this is not the worst dilemma Jacob has been facing lately. There's a strange vampire girl who wears an ancient talisman around her neck. She's been haunting Jake by appearing to him in the form of a recurring nightmare. Now it is up to Jake to figure out who she is and what she wants before it's too late. If he doesn't, both his people, as well as the Cullen clan, might be facing an inevitable battle against an enemy they know very little about. Join Jacob Black in his journey to uncover the mystery behind the talisman's evil powers. The fate of the Cullen-Quileute alliance rests solely in his hands, for he's the one link between the vampires and the werewolves. Every step of the way in this life-threatening quest will thrust Jacob deeper into a twisted maze of mind-bending adventures where nothing is what it seems. Dare to cliff dive into the abyss of dark humor and witty sarcasm that only Jacob's perspective can deliver. Go beyond the lovey-dovey, sparkly vampire fairy tale of the Twilight Saga and catch a glimpse of the true vampire underworld." (Summary taken from Amazon.com)

Russet Noon first came to people's attention in March 2009, when Lady Sybilla's publisher, AV Paranormal Publishing, started posting press releases[1] about the forthcoming novel, to be published in the fall. Russet Noon was also made available for pre-sale on eBay, and a website was put up.

AV Paranormal Publishing was assumed to be Lady Sybilla herself. Her marketing efforts also appeared to include creating a Wikipedia page and editing the FanHistory page for Russet Noon.[2][3][4] All these efforts were extensively mocked on Fandom Wank.

Later, the book was removed from eBay, but is still available for sale on Amazon.[5] According to the (now deleted) Wikipedia article, Russet Noon would still be published as a free paperback novel in September 2009, but would be donated to public libraries instead of being sold at bookstores. [6]

Lady Sybilla attracted negative attention not only for the attempt to sell Russet Noon and her reactions to criticism, but also for her statements about copyright (see below). 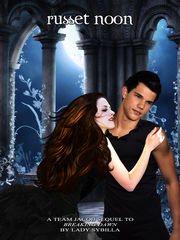 The author claims the right to publish Russet Noon professionally. According to one of AV Paranormal's press releases, Lady Sybilla believes that fans who support any given universe should have a share in the profits that this universe generates: "Every universe or, to put it in more commercial terms, franchise, feeds off our fantasies, dreams and hard earned dollars. When we give life to a universe, when we become its fans and financial supporters, we become the human batteries that keep its matrix alive."[7]

Sybilla opposes certain aspects of copyright laws, namely those dealing with the private ownership of characters: "Characters don't belong to authors. Authors don't create characters. They merely channel them. Characters are recurring universal archetypes."[7] Yet, Sybilla says that even though she opposes these laws, she still acknowledges Stephenie Meyer's right to claim copyright ownership over the characters in the original Twilight series. She also says, "Well, I had already bought an ISBN number for it and everything but I withdrew it, because I realized I’d never get away with selling it, so I gave refunds to all the Ebay buyers, and now I’m waiting a while to see how things turn out. But probably the release will still be September, in chapters online."[8]

Lady Sybilla's behavior was discussed in many fannish and nonfannish online spaces. Fandom Wank, ONTD[9], the Twilight Lexicon website[10], and even nonfannish bloggers such as pro authors Peter David and Lee Goldberg posted about it. Coverage was universally negative. For example, Peter David hosted a round robin satire inspired by Russet Noon called Potato Moon on his website.[11]

Many fans wondered whether (or how soon) the author would get a Cease and Desist notice from Stephanie Meyer, the author of the Twilight series. However, it wasn't until Lady Sybilla shot an explosive video at the 2010 Teen Choice Awards, announcing the Amazon release of her book, that Hatchett Book Group took her seriously and finally emailed her the C&D.

Caito posted several wank reports to Fandom Wank between March and June 2009, collectively known as The Russet Doom Saga[12], and kept track of the series of events[13] on her JournalFen account. The wank reports were very popular, and community members made many macros and icons and even posted potato recipes (playing on the "russet" of the title).[12]

Apparently, Lady Sybilla was upset with Caito's first account[14], sent her several vaguely threatening emails[14], and added revealing details about Caito into a Fanhistory page[15]. Caito posted the series of email exchanges, which was a big enough hit to inspire someone else to record a dramatic reading of the first email and post it on YouTube.[16]

Hachette Book Group's Cease and Desist Letter to Lady Sybilla was sent August 9, 2010, on the grounds that the cover design of the book was too similar to the Twilight covers.