From a submission request for a third issue (never published) in Universal Translator #24: "Ruff Cutz III will be a loaner zine for writers who want to see their work in print but do not want to submit to a 'pro-zine.' Zine will consist of rough draft copies of stories, with only grammatical changes. Open to all fandoms, but no same sex." 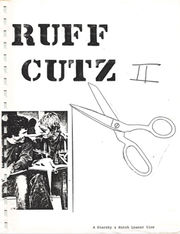 Here it is finally, in your hot little hands. Bet you thought you would never see it, right? Well, at times so did I. In fact, I wanted to retype every story and make it neat and pretty. but as you all know, old man time has other ideas. So what you see is what you get. The stories are just as they came to me, some in rough form, but that was what this zine started out to be, ruff cutz. Hope you all enjoy the stories as much as I have, wish we could have gone on and on with this, who knows, if I get some more stories we may just do that, (hint hint)

If you have any comments, please feel free to let me know.

Until next time (maybe) May the Force Be With You, and May you Live Long and Prosper.