Return to the Source

Return to the Source is a gen Star Trek: TOS 78-page novel by Nicole Comtet. It has illustrations by the author. 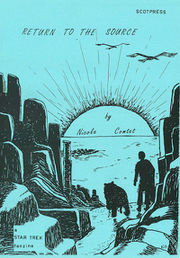 Description from Hupe: "Spock is captured by Romulan spies."

Spock, delivering secret information to Vulcan, is captured and interrogated by Romulan agents. He is only saved by his mental links with Kirk and Sarek. His meeting with the musician T'Kahalin speeds his recovery.

Spock has returned to Vulcan on shore leave as a guest lecturer at the Vulcan Academy, but there is a second, more important, reason for the visit, and only a few selected persons know of it, including Kirk and Sarek. Due to leaks in Starfleet communications, Spock is being used as a courier. Before he can complete his mission, he is kidnapped. Only by a collaboration by the Vulcan Academy and Kirk is Spock finally rescued. A thoroughly enjoyable story, especially to Spock fans. [1]

In Return to the Source and Blow Back, Nicole builds on the events of Amok Time, developing T'Pring as a character in her own right. In Blow Back, T'Pring has grown tired or Stonn, and has engineered their 'unbonding'. She realises that she made a mistake in rejecting Spock; his wealth and social position now seem very desirable, and "T'Pring had never realised... how dangerously attractive Spock was... ". Anyway, she decides that she wants Spock back - after all, Spock is still unbonded...

The zine is the story of T'Pring's attempt to achieve her goal. Spock, Kirk and McCoy are planning to take leave on Vulcan; their arrival delivers Spock to T'Pring's scheming and puts his life in jeopardy. He is forced to fight a duel, a matter of honour, a legacy of Vulcan's warrior past, and an activity forbidden under Vulcan law.

In these zines, Nicole has created her own highly credible Vulcan universe. Interwoven into the story there are many details about Vulcan life. There is a love interest tor Spock which remains undeveloped in this story, but which I hope that Nicole will explore in a future zine. Nicole's style is easy - a pleasure to read; I found myself carried along by the narrative, totally absorbed, and at the end I wanted more...

A footnote; it is not necessary to read Return to the Source before Blow Back. Each story stands alone. I recommend this zine to Spock fans, but the Kirk/Spock/McCoy relationship is not neglected, with McCoy providing his usual brand of humour. [2]