Radiant Under Every Sort of Light

Summary: "Just your everyday Circus AU. Or: In which there are aerialists, decorative metal flowers, prejudices, artsy books and magic. Obviously.

“If you want an autograph,” Arthur tells him, “you’ll have to buy it at the merchandise caravan. I think they’re five pounds.”"

Merlin wants to join a circus because he hopes that hiding his magic in plain sight will allow him to really be himself without anyone noticing that his tricks aren't just illusion. However, Uther Pendragon, the owner of the circus Dragonera, strongly despises all magicians so Merlin starts working for Gaius, tries to prove himself, shares a caravan with Arthur and secretly falls in love while Arthur thinks Merlin isn't interested. There is angst (but not too much), pining, romance, and the canon verse characters and dynamics fit beautifully into this AU setting. 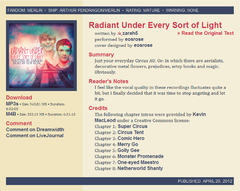 The story was posted as a WIP in eight parts and each part had a different story banner by inderpal. Later littlewolfstar made two pieces of fanart based on the story[1] and on a scene from chapter 5,[2] kafers made a picture of Merlin that was inspired by the story[3] and semiramis drew Merlin’s Circus AU performance.[4]

In 2012 eosrose podficced the story.[5] It is available as mp3, audiobook and in eight streaming audio chapters.

"Circus AU. Absolutely fabulous. Merlin joins the circus to be a magician. It takes him a while to win Arthur’s trust."[6]

"In which Merlin runs away to join the circus, Arthur is a daring young man on a flying trapeze, and they somehow manage to keep sharing a trailer for months while each under the misapprehension that the other is straight. This fic is - well, the climax of the fic is a flying routine under a dark circus tent with the only lighting as magical fireworks, and if you can imagine what that feels like - that's kind of what this whole fic feels like."[7]

"I love how this AU keeps the important things about the canon and the canon relationships--Merlin's magic is particularly charming, with the flowers and butterflies. And. Just. All of it, actually--'Charming' is a really good descriptor for the whole fic. <3"[8]

"Just read - and enjoyed - the whole thing! I loved the pace of the story, and the gradual removal of all the misunderstandings between Merlin and Arthur. And I was ridiculously excited when it came to Merlin's performance!"[9]

This is such an IC AU, as in, it's a very very believable AU and it would need just very, very little tweaking to turn it into a parallel universe along the actual Merlin!verse. Muchly awesome, really. Aw. *draws little glittery hearts that fade at the slightest touch around the story*[10]

"You know what I love the absolute most? That it doesn't end on an absolute final 'and it was sunshine and rainbows forever the end'. Everything isn't resolved, Uther is still a bastard and Merlin hasn't got his show. But those things will come eventually."[11]

"I realize this was written about three years ago, and I'm probably the last person to get around to reading it. But just in case there's one other sad soul like myself out there who hasn't read this, do yourself a favor and read it. It's a wonderful read. Arthur and Morgana make excellent aerial acrobats, the UST is through the roof, and Merlin and Arthur have a fantastic relationship reminiscent of S1. Loved this fic so much."[12]