Quotev is a for-profit quiz site marketed to teens. 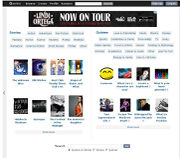 Fans can write and post their own quizzes and stories at Quotev.

A similar site was Quizilla.

Fan Fiction is listed on the home page as one of the major Story categories. As of November 2015, the Fan Fiction page displays popular tags that include the following fandoms:

Other tags include variations on the names of One Direction members, as well as genre tags like Reader, Romance, Fantasy, Adventure, Vampire, Action, Horror, Realistic, and Mystery.