Queer Madness was a horror zine by Wilum Pugmire. It was published in the 1980s.

Looking for things to scan and thus share with y'all, I found an old issue of Queer Madness (a zine I did for ye E.O.D apa) from 1980. It's a fun issue to read because it's almoft like a wee journal of things I was doing then -- it amuses me that I was then so intent on writing my first novel, a thing I have yet to accomplish. I had some remarkably good artwork in that issue -- including these two items (above and below) that were originally drawn for my chapbook tribute to Carl Jacobi. [2] 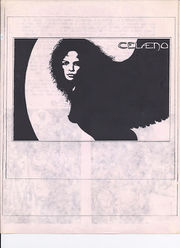 Queer Madness #1 was published in 1980. It was included in the 31st mailing of the Lovecraftian APA Esoteric Order of Dagon. 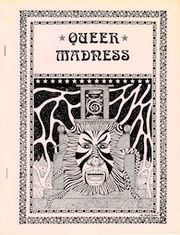 Cover of the issue #2 by Michael Roden

Queer Madness #2 was published in October 1980 and had 12 pages. It was included in the Hallowe'en mailing of Esoteric Order of Dagon.

Editor and publisher FROG (WILUM PUGMIRE) was and is a very productive and original zine publisher. His publications have covered a dizzying array of topics and are always top-notch. His zines tend to be quirky to be sure (note the date above) but that just may be their greatest strength. And the quality and his passion for the subject-matter are always quite evident.

This wonderfully imaginative untitled drawing of a tiger-faced man also appeared on the back cover of THE LOOKING GLASS #15. [4] 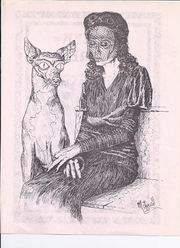 Queer Madness #3 was published in 1981. It was included in the 33rd mailing of Esoteric Order of Dagon.