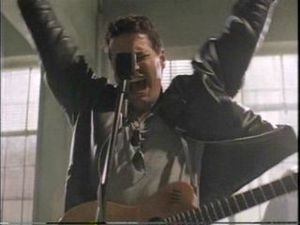 A fannish name for thrusting both arms above one's head in elation or victory, also represented by the emoticon \o/.[1]

The term refers to a gesture made by BSO Paul Gross in Voodoo, a hilariously cheesy music video made for one of the songs on his album.

Popularization of the term

The term presumably began as an in-joke among Due South fans who had been traumatized by the awesomeness of the Voodoo music video. On May 10, 2007, Brooklinegirl hosted a collaborative picspam on her livejournal of various people, animals and things doing Paul Gross arms, in order to celebrate her birthday. [2] Fans were also encouraged to post Paul Gross arms pictures in their own journals. [3]

The emoticon \o/ is often used as a shorthand form of "Paul Gross Arms," but is not itself a fannish symbol and has been in general use on the Internet since long before this fannish term was coined. \o/ represents the action of thrusting both arms above one's head in elation or victory. Most fans outside of the due South and C6D fandoms either do not use or are not aware of the "Paul Gross Arms" meaning of \o/.