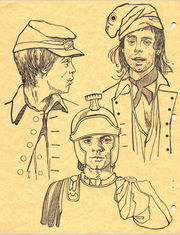 back cover by Kate Nuernberg 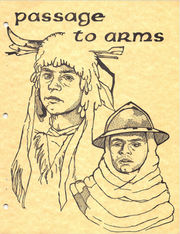 Passage To Arms is a Star Wars 142-page anthology published in 1982. There were 150 copies printed.

Front and back covers are by Kate Nuernberg.

I guess I should say something about the stories herein Well - first of all, none of them are exactly your usual story. Pat's, right off the bat is weird. Of course, my tastes are peculiar, so who am I to complain? And Anne's "Kessel Syndrome" is not the usual Han-piece. And then for those of you (like me) who like comic books, Tim Eldred has drawn us a marvelously complete comic book in "The Littlest Bounty Hunter." Kate's "One Less Debt" has as its hero a Luke Skywalker that I like very much. And "A Tangled Web" is, well, tangled.

I don't think it was even a year ago when [Deb] said to me, "I want to do a Star Wars zine.'" From there it was discussions on why we didn't want to be all Rebel-oriented, finding a title, contacting authors we wanted in the 'zine, and finding artists, etcetera, etcetera.

Passage to Arms started as a one-shot. We were not going to do any more issues Just wanted to have our say in a zine that showed both sides of the question. Now, we're not so sure. We have at least two authors we want and who want to be in a second issue. And we're getting a pretty good pre-publication order list.

This zine contains generally acceptable stories. Unfortunately, the layout is so appallingly bad, with pages out of sequence, blank lines in the center of paragraphs, and repeated sentences, which negate the impact of the pieces. It's a shame... For my money, the best piece is 'The Littlest Bounty Hunter.' Done in the style of the Marvel comic book, it has Han, Luke and Chewie on a weapons run, whereupon a two-foot-tall bounty hunter, a nine-foot tall Wookiee, and about a million stormtroopers raise various objections. Great drawing, well-paced plot. A close second is 'The Kessel Syndrome,' a nicely charactarticed adventure yarn which ties together the spice mines of Kessel, the twelve-parsec Kessel Run, and why Han owed Jabba money. On a more ambitious, and deeper level, 'Extreme Unction' (from the 'Black Sabre' universe) tells the story of a psychopathic telepathic who finally gathers the strength to leae the circumstances -- interrogating and killing for the Empire's goals -- that were driving her over the edge. I'm not sure the piece succeeds, as I'm still not sure what d'Loren, now Peride Sjani, was trying to do, but the story holds the reader's attention and offers interesting scenes and phrases along the way. 'One Less Debt' also attempts some serious thought -- when Luke is forced to kill as part of his fighting-slave disguise, how does he reconcile the murders he must perform with the Forces? -- but stops short of actually tackling the dilemma in favor of getting on with the plot: Lando pits 'his' slavefighters Chewie and Luke against Jabba the Hut's in order to win the thawed Han back. Guess how Luke has to fight? Not so hot are 'Journey's End' in which Leia is tempted by the Dark Side to find peace, and 'A Tangled Web,' mostly because, though both are trying hard to be profound, neither succeeds in coming to any sort of a point... [1]