The Party Spirit Series by O Yardley is a series of twenty-six episode tag stories (about 141 pages) written during the time of The Professionals Circuit Library. 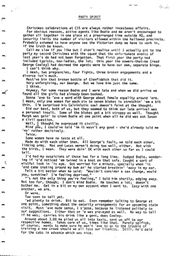 a sample page from it as a circuit story

The stories take Bodie and Doyle from just friends and partners, through fuck buddies and to a committed relationship. The series was often recommended to new fans because each story could be read as a companion piece to the aired episode that it followed.

These stories were hugely popular back in the day. Because they were a combination of hand circulated and then later published stories, collecting an entire set was often the Holy Grail for new fans. Fuck-buddy stories; stories that took their time and relished each emotional step of the way, and stories with a realistic tinge, all three were relatively rare at the time -- perhaps that's why this series was so well loved.

"The Party Spirit sequence grew out of a throwaway sentence in one of Sebastian's early tales. I'm sorry I can't recall its title and haven't time to go reading through everything to find it....It was something to the effect that Doyle recalled Bodie getting drunk from time to time, kissing him and going home happy but that neither of them ever referred to its having happened."[1]

Titles in the Series 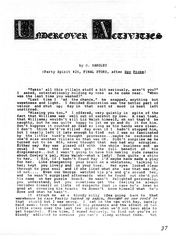 There are 26 stories which follow the episodes of The Professionals rather closely and show the burgeoning sexual relationship of Bodie and Doyle as they go from platonic partners to occasional fuck buddies to a close and loving serious relationship. I love the way this is done and it remains one of my favourite Professionals stories. Perhaps it's because it's one of the first things I read in this fandom that the Party Spirit series holds such a special place in my heart.[2]

The "Party Spirits" series I initially found somewhat frustrating because the lads' relationship seemed to be going nowhere fast, but I've now come to value these stories quite highly, because like in real life, sometimes things don't go smoothly and enduring relationships take a while to forge. [3]

- "Party Spirit" was sent to me, complete. I was impressed too. Even more so than RGB's "Waiting to Fall." This fits between various episodes. The finesse here is that each story stands alone, yet all present one long tale, each contributing toward a conclusion. My only "gripe" (and it's not a big one) is that the conclusion isn't too conclusive. It's left up in the air a bit and the reader has to assume a lot. Perhaps the series was meant to be added to. [4]

....my favorite examples of good PWPs are (in Pros) the Party Spirit series, where in 25 short scenes a complex relationship is charted--even though each individual story is little more than a sex scene--and (in B7!) the Game of Tag series from Oblique, in which each character behaves totally characteristically, and there's even some character developement and change... A good PWP can be like a miniature portrait, with exquisite detail and revealing personality--a bad one is more like a pornographic cartoon...[5]

....so many of the goodie oldies are faded, missing pages, hard to find. How many of us were able to get a complete copy of O Yardley's "Party Spirit" series the first time we wanted one? Those who live near a fan with a complete collection are lucky (I think of LA and Lily -- the mother of Pros -- and wonder how I can get her to move here).[6]

[Beneath Your Station]: Two days after It's Only A Beautiful Picture, and Bodie finds himself still angry with his partner. Of all the places he could choose to have the argument – he picks the tube. O.Yardley has a real talent with the lads and their dialogue, I adore her. This stands alone, but is part of a beautifully long series... [8]

All who have watched the series try to guess when they started the deeper side of their relationship, O'Yarley does just that. Using the eps as backdrops, she shows us behind the scenes what could be happening. Back in the day this story was dealt out over several years as fans waited for the next installment to be mailed to them. You don't have to wait that long! I have put chapters 2-26 under the cut:) See ya all on the flip flop![9]