PalletShipping is a term for the Ash/Gary pairing in the Pokémon fandom. It was named for the characters' shared hometown, Pallet Town.

PalletShipping was one of the original ships in the Pokémon anime fandom, and PalletShippers were often involved in ship wars with PokéShippers, fans who pair Ash with Misty. Misty was a common target for bashing by Palletshippers, spilling over into their fics. 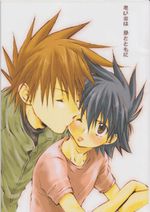 Doujinshi art by Hibari A