Overshadowed is a Dark Shadows story by Marcy Robin and Pat Lammerts. It has the subtitle: "Or What Really Happened at ShadowCon…". It was a very early RPF and quite controversial. The story involves two fans at ShadowCon and what they discover. 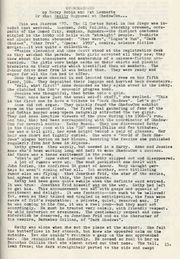 "Overshadowed" was printed in The World of Dark Shadows #14.

Two similar fanworks are Visit to a Weird Planet (1968) and The Totally Imaginary Cheeseboard (1988).

Near the end of the story:

"He's...he's gone back to Collinsport," Kathy sniffed quietly. "He really lives there." She looked up with tear-filled eyes. "He really is Barnabas Collins," she explained. "A true vampire, 175 years old." She met ,.he astonished stares. "He...he only pretended to be an actor named Jonathan Frid." She shook her head. "Now he's back to being only a vampire again. I knew this and it's the truth." She sighed deeply and blinked away tne tears. "He's gone now. Back home."

"It's OK," Anne soothed, putting an arm around Kathy's shoulders. "We understand. It's all over now. You'll be fine." She smiled comfortingly. Kathy nodded numbly. It was over at last. Or so they hoped. Sunday evening seemed years later, not just 24 hours. Jessica and Annt drove back to LA after the Con. So much had happened... They had been late leaving San Diego. Now they drove In the darkness of early night. "I can't believe it," Anne mused for the tenth time. "Dark Shadows...and somehow there was a real vampire named Barnabas Collins. Not a made-up character for a TV show. A real vampire, who just took the name of Jonathan Frid." Jessica shook her head. "Who would've suspected, or even known?" she wondered. "This vampire found some way to walk in the daylight while the show was on the air, but how—why?" She sighed. "We'll never know." "I guess Kathy's right," Anne continued. "He's returned to Collinsport now. Perhaps he came here out of curiosity, or because revived interest in the show would've meant a new beginning for him. Maybe he even came for fresh blood—a DS con is the perfect place to start." "Yeah." Jessica was thoughtful. "But at least Kathy will be OK now that he's gone. That's good to know." Anne nodded.

"It is a relief," she acknowledged. "Speaking of victims, though," she added. "What about those two dead girls? I hope the crosses and garlic work. Thank goodness they won't rise again." [1]

I read "Overshadowed". And reread it. And reread it. It was the greatest, most excellent story ever! The idea of real people-- you, Frid, etc.--as characters was superb! The whole thing was very well done. [2]

I really didn't care much for "Overshadowed". It was cute, but just didn't hit me right. To my thinking--much ado about nothing. [3]

I thoroughly disliked "Overshadowed". To write in a story that Jonathan, someone whom we all claim to care for and admire as a person, to say that he does not exist and that Jon was Barnabas in real life was really terrible. I feel that it was done in poor taste. [4]

"Overshadowed" has drawn the fire of several of my correspondents, and no doubt you have already received adverse criticisms of it. You see, Jonathan was very sensitive about being 'overshadowed' by the character of Barnabas. Some people were cruel enough to tell him they were fans of Barnabas Collins, not him, and he was deeply hurt by these comments. Of course the writers, not knowing him as we long-time fans do, just wrote it as a clever story, but we hope he never sees it. [5]

Overshadowed was exciting and certainly original. Mixed with humor, it made the story really interesting. [6]

"Overshadowed" was amusing and entertaining. [7]

I really hated "Overshadowed." Jonathan Frid would be very hurt to think his fans would write a story like that. I love stories about Barnabas, but to make Jonathan a murderer is awful. [9]

The reality of ShadowCon was fine enough, and to have it "given" to us (I'm including "Overshadowed" in that) was a lovely gift… You know, I can't help thinking that "Overshadowed" would make a great movie… [10]

Overshadowed is hilarious--brought back memories of some Star Trek cons. [11]

[a fan teases the editor, who starred in this story]: Regarding "Overshadowed"--I hope the holes in your neck have healed by now. If not, I'll see if I can arrange an appointment for you with a Dr. Leng. He used to do good stick jobs cheap. Come to think of it, I don't think he was ever paid at all… [12]