Orhuen Obbligato is a 111-page Starsky & Hutch/Sime~Gen crossover pass around story by two authors: Nancy G. and an unknown author. [1] 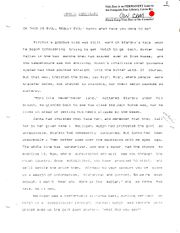 The text is mostly double-spaced; a few single-spaced. Some dot-matrix-printer; some typewriter (possibly an IBM Selectric pica). The author/typist used at least two different typewriters (heavier type on some pages). Thoughts are marked with "//" before and after, but this symbol is used for internal thoughts, not telepathic. The binding was patented ~1986, but this is not necessarily a clue.

The copy shown here appears to be a rough draft, as there are notes in some of the margins. At one point, the author writes "The day passed enjoyably. //Insert your own slash sex scene, Sparky, I'm not qualified.//"

Fighting for Duo is another pass around story that may be related to "Orhuen Obbligato."

This is likely the fiction that Jacqueline Lichtenberg discussed in Three Letters on the Subject of Homosexuality in the Sime/Gen Universe.

From Jacqueline Lichtenberg in 1979:

I ask you to consider that HoZ was written about 6 years ago on premises I conceived in my teens over twenty years ago! It does not' represent my current thinking, and in fact doesn't even represent my thinking as of the time I wrote it. As a result of my first pre-publication showing of HoZ to MZB, I was led to investigate the phenomenon of homosexuality in human psychology. Until I wrote HoZ the word had only a dictionary definition for me. It honestly never occurred to me as a teenager that people could be sexually attracted to others of the same sex — and this attitude is still deeper in my thinking than I really like to admit considering the world as it is today. It rather horrifies me, but it is still there. Witness: this last weekend Carol Lynn and Debbie Goldstein, the eds/publishers of Kraith Collected, were here. The first advance copy of UNTO ZEOR, FOREVER was also here, and they read it. First thing they spotted was an error I had passed over no less than 10 times during the course of putting that book through publication — in the glossary I define Lortuen:

Now to me that does not imply that there is any sexual component to the orhuen relationship. However, my fans immediately point out that most people take to mean that there is. They brought me a Starsky & Hutch story [2] in which Starsky goes through changeover and Hutch establishes creating an orhuen, and the essence of the story revolves around Hutch loathing himself for being sexually raped by Starsky (or seducing him, he can't decide which).

I pointed to the definition and declaimed that it is clearly stated there is no sexual component to orhuen — and they said there was. My error was semantic. To me, the statement "between members of the same sex" deletes all connotations of sexual love and/or passion between the two! It was completely subconscious and though I had thought I had weeded that out of me, there it was again! And in print! Oy veh! [3]

Addressing slash and gen and orhuen.

Now that Unto Zeor, Forever has appeared (hallelujah), we find that there might be some confusion over the term orhuen. It is implied in the phrasing in the Vocabulary section (see "Lortuen") that orhuen, like lortuen and torluen, is a sexually reinforced locked transfer dependency. T'aint so. Lortuen and torluen are consummated (brought to fulfillment) when the male/female matchmated couple go immediately from transfer to sex. Orhuen, a relationship between Sime and Gen of the same sex, is consummated through transfer alone. No sex is involved. In fact, it would be rather difficult, since the partners generally experience painful static discharge if they attempt to touch each other after transfer. If they desire post-transfer sex, the orhuen partners can seek out members of the opposite sex. So to clear up any problems, you might think of orhuen as "a selyur nager locked transfer dependency between matchmates of the same sex. It is only slightly less powerful than lortuen/torluen. [4]

In the Sime~Gen universe, Orhuen is officially, canonically, incompatible with sex between the partners; post-transfer, they're supposed to each go find someone else of the opposite sex to screw. (A "perfect Distect marriage" is two pairs of orhuen partners who are married to each other.) (Distect is an underground political organization.) Officially, homosexuality is maybe unknown among simes; the need-cycle tangles with fertility and physical attraction to the same sex is impossible. However, fanfic has fixed this before, and the fact that orhuen is presumably involved here doesn't mean there can't be sex. Also, an orhuen link is so close to soul-bonding that you might as well call it slash even if there's no sexual consummation. Two people who absolutely *neeeeed* each other to live, who know each others' thoughts & emotions (the sime reads the other *very* clearly; the gen only has limited abilities), who once a month share an intimate physical act that's described in beyond-orgasmic terms... it's slash. [5]

"Hutch whirled around instantly and advanced toward Starsky, his tentacles clenched tauntly like fern fronds -- a sure sign he was pissed. Starsky picked the field back up, knowing Hutch had sensed his own confusion and concern even if he didn't realize it yet."

''The glistening tentacles retracted and Starsky found himself pulled abruptly into a bruising kiss. Slipping free he trailed hands and mouth swiftly over muscled torso. He paid homage to the thick cock in passing as he sought entrance to Hutch's body. First with fingers then with lips and tongue he teased the tense ring of muscle asking admittance... Unable to hold back any longer Starsky lifted the quivering thighs over his own and guided himself in. The ronaplin stuff tingled as he was encased in Hutch's flesh... Then Hutch was meeting and matching him, ankles locked behind Starsky legs and ass working as he joined his lover in their drive towards orgasm. Lost in white heat Starsky barely felt the welt raising grip of tentacles on his upper arms...Release took him then and his universe dissolved into a burst of sparks."