Fighting for Duo is a 164-page Starsky & Hutch/Sime~Gen crossover pass around story.

Also see Orhuen Obbligato. One of these stories is the fiction that Jacqueline Lichtenberg discussed in Three Letters on the Subject of Homosexuality in the Sime/Gen Universe. 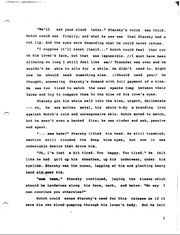 From Jacqueline Lichtenberg in 1979:

I ask you to consider that HoZ was written about 6 years ago on premises I conceived in my teens over twenty years ago! It does not' represent my current thinking, and in fact doesn't even represent my thinking as of the time I wrote it. As a result of my first pre-publication showing of HoZ to MZB, I was led to investigate the phenomenon of homosexuality in human psychology. Until I wrote HoZ the word had only a dictionary definition for me. It honestly never occurred to me as a teenager that people could be sexually attracted to others of the same sex — and this attitude is still deeper in my thinking than I really like to admit considering the world as it is today. It rather horrifies me, but it is still there. Witness: this last weekend Carol Lynn and Debbie Goldstein, the eds/publishers of Kraith Collected, were here. The first advance copy of UNTO ZEOR, FOREVER was also here, and they read it. First thing they spotted was an error I had passed over no less than 10 times during the course of putting that book through publication — in the glossary I define Lortuen:

Now to me that does not imply that there is any sexual component to the orhuen relationship. However, my fans immediately point out that most people take to mean that there is. They brought me a Starsky & Hutch story [1] in which Starsky goes through changeover and Hutch establishes creating an orhuen, and the essence of the story revolves around Hutch loathing himself for being sexually raped by Starsky (or seducing him, he can't decide which).

I pointed to the definition and declaimed that it is clearly stated there is no sexual component to orhuen — and they said there was. My error was semantic. To me, the statement "between members of the same sex" deletes all connotations of sexual love and/or passion between the two! It was completely subconscious and though I had thought I had weeded that out of me, there it was again! And in print! Oy veh! [2]

Orhuen is officially, canonically, incompatible with sex between the partners; post-transfer, they're supposed to each go find someone else of the opposite sex to screw. (A "perfect Distect marriage" is two pairs of orhuen partners who are married to each other.) (Distect is an underground political organization.) Officially, homosexuality is maybe unknown among simes; the need-cycle tangles with fertility and physical attraction to the same sex is impossible. However, fanfic has fixed this before, and the fact that orhuen is presumably involved here doesn't mean there can't be sex. Also, an orhuen link is so close to soul-bonding that you might as well call it slash even if there's no sexual consummation. Two people who absolutely *neeeeed* each other to live, who know each others' thoughts & emotions (the sime reads the other *very* clearly; the gen only has limited abilities), who once a month share an intimate physical act that's described in beyond-orgasmic terms... it's slash. [3]

An Excerpt, One Which Appears to Be Pretty Slashy!

"We'll set your clock later." Starsky's voice was thick. Hutch could see finally, and what he saw was that Starsky had a cut lip. And the eyes were demanding what he could never refuse.

"I suppose it'll reset itself" Hutch could feel that cut on his lover's face, but that was impossible. //I must have been zlinning so long I still feel like am// Transfer was over and he wouldn't be able to zlin for a while. He didn't need to. Right now he should need something else. // Should need you// he thought, answering Starsky's demand with full payment of a kiss. He was too tired to watch the near sparks jump between their faces and try to compare them to the blue of his love's eyes.

Starsky put his whole self into the kiss, urgent, deliberate --- no, he was molten metal, his whole body a branding iron against Hutch's cold and unresponsive skin. Hutch moved to match, but he wasn't even a banked fire; he was cinder and ash, passive and spent.

"... mmm babe?" Starsky lifted his head. He still trembled, emotion still clouded the deep blue eyes, but now it was undeniable desire that drove him.

"Oh, I'm just a bit tired. Too happy. Too tired." He felt like he had grit up his sheathes, up his underwear, under his eyelid. Starsky was the ocean, lapping at him and planting heavy sand all over him.

"mmm hmmm," Starsky continued, laying the kisses which should be landmines along his face, neck, and below. "No way I can convince you otherwise?"

Hutch could sense Starsky's need for this release as if it were his own blood pumping through his lover's body. But he felt or himself. His body was pollshed wood, once allve, still warm even, but unfeeling: dead. Starsky, on the other hand, was reaching a fever pitch, as if, once the orhuen set the course, he must respond, no matter the status of his partner.

Hutch knew no way to wish him anything other than fulfillment. "Just make your way, and I'll follow later."

Starsky paused, barely reined in, his concern surfacing. "You o.k.?"

Hutch received him with a silent, nonphysical pleasure. Soon it didn't matter that he was unmoved, he needed only to hang on to rock his lover home.