You may be looking for OASIS, a fan club for Armin Shimerman.

Oasis is a K/S slash Star Trek: TOS novel by Alexis Fegan Black. It was published by Pon Farr Press in 1990 and has 104 pages. The front cover is by Deeb and the title page is by Marilyn Cole

Interior art is by Deeb and Marilyn Cole and has been reprinted from other Pon Farr Press zines.

The story "Oasis" is reprinted in 5 of Hearts: The Collected Short Novels of Alexis Fegan Black.

Publisher's summary: "Four short stories woven together to form a novel. OASIS is strictly for fun! In this novel you will not find a shy, inexperienced, emotionally crippled Spock. Nor will you find a Kirk who is afraid of his feelings, or who wrings his hands at the mere thought of admitting those feelings to Spock. What you will find is a situation wherin two emotionally and sexually competent men come together to share their love."

From Gilda F: "While stranded when the shuttle develops problems, Kirk and Spock use a mind-link to entertain themselves."

An Anecdote About the Cover 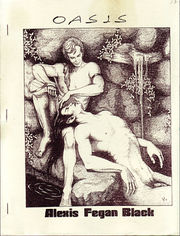 title page: Note: This image has been marked as sexually explicit and has been minimised.
The artists shares a memory in The K/S Press #7 (1997) about finishing the art, and her husband's help with printing it:

Once when I had worked 'til the last minute on a drawing and had to pack to leave for California in the morning, he [husband] offered to take said drawing to the printer to be copied. Now, this just happened to be a rather large drawing of K/S, very naked, and K is washing S's hair. As it turns out, my regular printer couldn't handle anything of that size, and my husband toted that thing all over town (a small, very conservative area) until he found someone who could.

That's what one of the proofreaders called OASIS, and as the writer, I'm not inclined to disagree. For those of you who remember A QUESTION OF BALANCE, my first K/S novella - you will probably find OASIS similar in... er... content. OASIS is not meant to be deep or even though-provoking. It's meant to be fun  and - hopefully - a love story. After writ ing some of my other K/S novels - YEAR  OF THE RAM, DREAMS OF THE  SLEEPERS, DAYBREAK and VAGABONDS, just to name a few - it seemed that the time had come to play. It seemed to me anyway that it was time to break away from the traditional angst we so often see in K/S and just let the characters enjoy one another. You will not find a shy, virginal, embarrassed, cowering Spock anywhere within these pages (unless, of course, you count the fantasy Spock in The Birthday Present. Nor will you find a hand-wringing, uptight, homophobic Kirk. (Well, Kirk does wring his hands once or twice within the first few pages, though not because of his feelings for Spock). What you will find in OASIS are two grown men who happen to love one another and who set out on a series of mental journeys to prove it. OASIS is very adult in nature, and if you're offended by graphic sex scenes with just a little kinkiness thrown in, stop right here.

I would especially like to thank Deeb for the inspiration for OASIS. As I'm sure you'll agree, the cover art is fantastic, and without it, OASIS itself wouldn't exist. Deeb's cover for Naked Times #22 also served as writing inspiration for the chapter entitled Night Life On Nineva Nine: her young-Kirk cover of Naked Times #23 was the backbone of Chapter Two - Just An Iowa Farm Boy. Also, thanks to Marilyn Cole for her inspiration on The Birthday Present. The illustration used for that chapter was originally the cover of Otherwhere/Otherwhen. So... what I'm saying is that I probably wouldn't have written any of the stories in OASIS if it hadn't been for these two magnificent artists. Thanks to both of you for the inspiration.

Again, as to why the pages are green rather than white, it's because - quite simply - I'm tired of supporting zine pirates. I work too hard on my zines - especially my own novels - to have them unscrupulously copied by thieves. So until some other solution can be found, I'm afraid we're all stuck with the green paper. Anyone who's already read VAGABONDS has undoubtedly heard my complaints on the pirating of zines, so I won't go into it again here. If you haven't heard the whole story, I'll gladly send you a copy of my editorial in VAGABONDS for a SASE. The only thing that does bear mention is that tbe green paper is approximately three times more expensive than white, so if the price of OASIS seems high, that's why. Thanks to zine pirates, many editors are already starting to look for other solutions, and if someone can come up with an inexpensive manner to produce zines which can't be photocopied, please get in touch with me.

Finally, I hope you will enjoy OASIS. As I said, it's definitely different than the majority of my K/S novels, though admittedly it was enjoyable to write. Hopefully, it will be enjoyable to read as well.