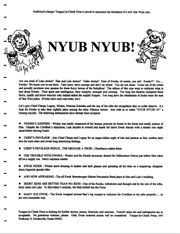 flyer printed in I Don't Care What You Smell #2

Nuyb Nuyb! is a parody flyer for a proposed zine that was never meant to be published.

The flyer was done in fun, and meant to appeal to fans who disliked Ewoks and their role in the Star Wars movie.

Are you tired of Luke stories? Han and Leia stories? Vader stories? Fans of Ewoks, of course, you are! Ewoks?? Yes:.... Ewoks! We know you're out there. Take heart, have courage and don't be afraid. You are not alone. Come out of the closet and proudly proclaim your passion for those fuzzy heroes of the Rebellion! The editors of this zine want to celebrate what is best about Ewoks. Their spirit and intelligence, their integrity, strength and cunning. Too long has fandom maligned these fierce, cuddly and brave warriors who helped defeat the mighty Empire. Too long have the inhabitants of Endor been the butt of Star Wars jokes. (Ewoks have such cute butts, too!)

Let's give Chief Chiipa, Logray, Wicket, Princess Kneesha and the rest of the tribe the recognition they so richly deserve. It's time for Ewoks to take their rightful place among the other Alliance heroes. Join with us to make "NYTB NYUB! #1" a rousing success. The following submissions have already been accepted: