The former is sometimes realized as a fusion with classic noir movies, for example as part of a reel challenge. The latter is sometimes inspired by canon itself, if the series has noir homage episodes or canonical noir AUs, such as several comic Elseworlds published by DC, or Picard's Dixon Hill holodeck adventures in Star Trek: The Next Generation.

First person narration is far more common in Noir Detective AUs than in fanfic at large as first person is strongly associated with the genre (The Big Sleep was written in the first person).

Because noir trappings offer distinct visuals, this genre is also popular with fanartists, and is a frequent prompt in art challenges. 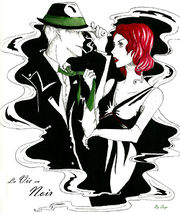 Lord of the Rings: