Never Ever Shall Be 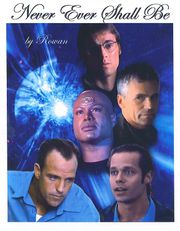 cover of the Agent With Style edition, art by Lilac

This zine appears to have been published first by Greycloud with a plainer cover, then by agented later by Agent With Style with a revised, jazzed up cover.

From the distributor: "When the ships came, everyone on Earth knew that there really were aliens. For a few thousand of them, the revelation was also a nightmare, because they were abducted and taken to Goa'uld-held worlds as slaves. Seeing what was about to happen, Jim Ellison did what he could to minimize panic and save lives and thus brought himself to the attention of Teal'c, the Jaffa in charge of the raid. The Stargate remained a secret but the SGC were forced to become multi national, and started to send out larger teams in the hope of finding where the captives had been taken and why (there were enough survivors that Daniel had been able to identify the Jaffa as those who served Apophis). On a routine mission, SG1 run into a slave-collecting raid and are taken to Chu'lak along with the villagers. Chu'lak is ripe for rebellion. Teal'c and Bra'tac decide to ally themselves with the Tau'ri, which can only be possible if they return the slaves to Earth. Jack and the others soon find himself caught up in a daring escape plan which could very well be a trap. And, in the meantime, Daniel and Sam are expected to perform other duties for their captors, who talk of escape but don't seem to be doing anything. Until..."