Murasaki! is a 108-page het Star Trek: TOS novel by Janice Hrubes. This fanzine focuses on the character of Sulu and is a sequel to Swords and Sulu. 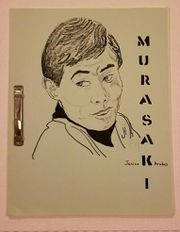 "A storm of phenomenal proportions. This sequel to 'Swords and Sulu' is a commentary on the rights of the individual... First is our right to change. Second (but no less important) is our right to Love... both to give and receive it. If only Sulu and Shana could convince the rest of the Universe that!" [1]

The author wrote this personal statement in 1980:

You have been kind and patient waiting until I received enough orders to go to press. I want to thank you for that. Now for the bad news: after numerous delays and a long went traipsing off to the printer with this limited edition under my arm to discover that the price quoted last year has almost doubled. While the cost of paper has risen only 32%, the price of printing on that paper has skyrocketed! And you already know what's happened to the cost of mailing. Now for the good news: I will honor all orders received before November 1 of this year. It will take me a while since the cost of the mailing will have to come out of my limited budget, but you will get your copy... I'm sorry. I know how long you've been waiting. I wish things were different. I've begged, pleaded, coaxed, and cajoled every printer with in the greater Houston area to no avail. I'm sure that there are those of you in Fandom who could have gotten this zine out in half the time and at half the price, but I've done the best I can with the resources that are available to me. [2]

Editorial from the Zine

First of all, I would like to thank all of you who took my character of Shana Rayna, the funny, feisty, half-breed Orion to heart. Such an outpouring of love! You know who you are. You are the ones who laughed with her, cried with her, stood beside and fought with her. And when I would have shelved the character you were the ones who refused to let her die. You made her your own. This book is for you. All of you. Wherever you may be. I only wish I had room for names.

Secondly, I would like to thank Virginia Lee Smith of Danville, Illinois, who not only offered to illustrate this sequel to Swords and Sulu, but who agreed to illo the third printing of Swords with hardly any arm twisting at all.

Virginia describes her artistry as a tiger, she pounces once and if she misses, she goes stalking off into the jungle, mumbling and grumbling to herself. You didn't miss this time, my fine furry feline.

n the artistic department, an honorable mention must to to Shona "Dawnsinger" Jackson who didn't know she was appearing. Shona has sent me some gorgeous illustrations over the years. While her style is radically different from Virginia's, it's equally beautiful in its own right. I couldn't resist.

Last but not least, I'd like to thank my sister-in-law [name redacted]. She isn't a Star Trek fan, but she came to my aid in a way that is reminiscent of Kirk bounding onto the bridge during a red alert. She not only finished the editing, she typed the master, called printers until her finger cramped, and helped collate, and kept me from crawling the walls while the rising cost of printing almost scuttled this zine. She did this with a high good humor and the patience of a Saint. I love you. I couldn't have done this without you. May the Great Bird of the Galaxy perch on your rooftree and frighten away all of your enemies.

Aside from never really explaining what a "mura-saki" is (besides the loose term, "an extremely dangerous phenomenon"), this novel is a totally satisfying romantic adventure story about Sulu and his green Orion wife. It's a pleasure to find good writing about someone other than the Big Three, and this tale involves the reader completely — from the time the helmsman learns his beloved has an alternate ego famed as "The most notorious assassin since ReChumn of Lystros" — through his and the senior officers' efforts to have her classified as a sentient human rather than a pet. It doesn't help when her legal owner shows up from time to time to walk her off on a leash. The plotline is skillfully calculated to prevent the reader's attention from wandering, and it is altogether well worth its modest cost. It is impossible, however, to ignore commenting on what must surely be the most remarkable bollix of collation (done by the printer) ever seen in a zine. It is a tribute to the fine writing and absorbing plot that said reader readily accepts the necessity to not only read from the bottom to the top of each page beginning with the third one (luckily they are numbered), but takes in stride the additional necessity of turning forward a page (beginning with page #60), then back to keep up with the story flow. It's well worth the effort, not the fault of the editor/author, and all her readers hope madly that Janice will go on with this great Sulu-Shana love story, as is hinted at the end of this one. [3]

Sulu and a woman of Green Animal-woman ancestry are the protag onists in Janice K. Hrubes' "Murasaki" and "Swords and Sulu." Sulu falls for Shana Raynes and more or less bullies her into marriage. His affection for her is real but his attitude towards her is all too obvious in his nickname for her -- "Baby." The relationship

does not remain fixed in a "happily ever after" mode at the end of "Swords and Sulu," but undergoes a series of seven shocks in the second book that leads to eventual recognition on Sulu's part that he must not only permit Shana her own existence but also must do some fast maturing himself if the marriage is to survive. This story has in common with "The Displaced" the very uncommon recognition that extreme possessiveness of one's mate is not a particularly desirable quality. [4]