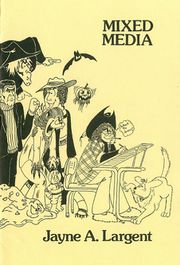 Mixed Media is a 40-page cartoon zine by Jayne A. Largent. "Preparation by Frank V. Litlz and Barbara Fister-Liltz.

I went to my first "Con" in 1974. That was the year I swear I was reborn. Which is pretty good when you consider I was only 16 at the time. My mother still refers to it as the time "Jayne went a little crazy." She only said that because I cleaned her wallet out by buying every Spock poster I could lay my hands on.

The really important event at that Con was my discovering Fan Art.

I began cartooning shortly after that, because I just love to make people laugh. It's been a passion for me ever since. Hopefully this little book will make some of you smile. That is it's [sic] intention.

My sincere thanks to those who buy it. For those who don't, you'll be sorryi I'll be famous some day!

Seriously, I hope it will be enjoyed. Thanks one and all.