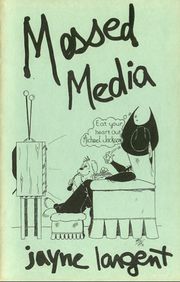 Messed Media is a 48-page cartoon zine by Jayne A. Largent.

While mainly cartoons, this also contains a lengthy logic puzzle.

Cartoons are in universes such as Star Wars, Doctor Who, Smurfs, movies, etc.

Oh Lord, here we go again. How does that saying go? Once more... oh yeah. "Once more into the breach." I almost find it hard to believe that I am doing this book again. Don't get me wrong. I'm not complaining. How can you complain about being asked for an autograph?

But, if someone had told me that "Mixed Media" would have done so well as to spawn a sequel, I would have laaaauuughed. I'm all done laughing now. Now I'm just trying to do as good a job as the first. In a small way, I think I know how Lucas felt. Knowing that he had to top "Star Wars". In all seriousness, I want to thank some people. Starting with my good friend, Maynard. If it weren't for her I wouldn't be doing any of this.

I also want to thank all the folks that bought "Mixed". What can I say? You people have taste... No, I very much appreciate all of you. Your comments, and support have helped me so much. As well as your commissioned work.