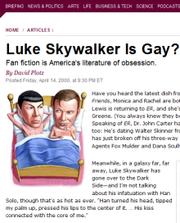 Illustration from the article. It features a caricature of Kirk and Spock in bed, with Kirk smoking a cigarette, implying that they just had sex.

Luke Skywalker Is Gay? is an article that appeared in Slate Magazine in April 2000.[1] It has the subtitle "Fan fiction is America's literature of obsession", which along with the illustration may give the casual reader the impression that all fan fiction is slash.

The article combines a humorous take on the fanfic phenomenon with examining fanfic as a reflection and outgrowth of modern culture. Repeatedly referring to fan fiction as "weird" (because it's "from the 60s"), the text covers a lot of fannish ground from Mary Sues, crossovers, h/c and other fanfic genres and tropes to virtual seasons, pseudonyms, the RPF taboo, conventions, etc.

A detailed discussion about slash ("the most flamboyant genre and perhaps the weirdest prose in America today") is linked in the sidebar [2] and the article freely links to several slash sites, including a direct link to one of Destina's Star Wars stories. Henry Jenkins' Textual Poachers is referenced to contextualize fan fiction within folklore and folk culture; and an article by Rebecca Tushnet about the legality of fanfiction is mentioned as well.

The cease-and-desist letters that Fox sent to Buffy sites, ordering them to remove show transcripts, and their warning to Millennium sites to remove logos and clips, as well as Lucasfilm's crackdown on audio clips and logos from Star Wars are contrasted with the TPTB's more gentle treatment of fanfiction.

Perhaps mindful of their dubious legal standing, studios tend to leave fanfic alone. Lucasfilm has suppressed Skywalker slash on the grounds that it harms the Star Wars image, but it allows PG-rated fanfic. Fox ignored fanfic when it went after the Buffy sites. But fear is mounting among fans that the studios are getting too pushy. Lucasfilm lit a brushfire last month when it offered fans free pages on its cherished www.starwars.com site. Fans would be allowed to post all their Star Wars hagiography there, including stories, songs, messages to other fans, and essays. But the small print says that Lucasfilm retains all copyright to anything placed on the site."[1]

Fandom references include: Friends, ER, Star Wars, Xena, Star Trek, Starsky and Hutch, Buffy, Highlander, Blake's 7, Due South, The A-Team, Miami Vice, Millennium, The Fugitive, Quantum Leap, Doctor Who, and The X-Files (specifically mentioned are the Spookys fanfic awards and MSR fanfic). WPAdmirer, Kat, Carrie Cook, MedianCat, and Elizabeth Durack are some of the 20 writers the author interviewed for this article.

If you missed the sidebar on slash, it is available at Luke Skywalker Is Gay? Sidebar 2 at archive.org. Sidebar 3 describes how slash writers get their characters into bed. Sidebar 4 has an explanation of the taboo against fanfic about real people. Sidebar 5 tells how kids and the Backstreet Boys are changing the culture of fan fiction (note the presumption that most fanfic writers are educated, middle-class white women). Another sidebar discusses fan-produced films.

Yet another article about fanfic garnered from the Net You might be interested to know that this one appeared in print as well It reads rather like an idiots primer to the doings of the peculiar - that's us, folks - but at least tries to be fair, amongst all the pointing-at-the-weirdoes. And I should say that it was positively garlanded with links to articles which explain in more depth some of the topics it only touched on; the history and development of slash, for example. While some of its patronising comments annoyed me, I reprint it here because I think it raises some interesting questions; not least the one that goes, is this how They really see us? [3]

"Enjoy" wouldn't have been the word for it, but it was an interesting article. Kind of flawed, which is good for me-- it means there's something left to say. [5]

Note: by David Plotz, Slate's Washington Editor. A humourous and fairly written (in my opinion) article on the fanfic phenomenon, examining fanfic as a reflection and outgrowth of modern culture. Not too bad a job deconstructing slash, either, in an intriguing little sidebar. [6]