Logic is a Pain in the Ass 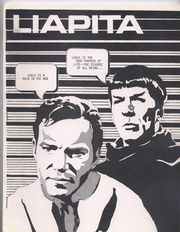 Logic is a Pain in the Ass is a humorous Star Trek: TOS gen 80-page zine by Dusty Jones. It was often advertised as LIAPITA, because Dusty Jones and her then co-editor Wendy Schatz liked the acronym.

Regarding a possible second issue called "LIAPITA, Too!: "Scheduled offerings include 'Kirk in Mirrorland' -- a musical spoof on u-guessed-it; 'Little White Lies' -- MacLeod's sequel to 'A Vulcan's Tea Party'; 'To Sleep, Perchance to Dream' and more. Contributors welcome." [1]

'To Sleep, Perchance to Dream' and "Kirk in Mirrorland' were supposed to have been withdrawn by author Wendy Schatz's request.

From the publisher's ad:

'"Feel like reliving those golden days when con was synonymous with NYC, when we learned to swear from the bloopers, and the ST movies were only a gleam in the Great Bird's eye? Or do you just wish you were there? Well, journey on back with LIAPITA through a collection of fan fiction as old as Trek itself and as new as today -- many items never before published -- some nearly legendary! 'Babble On Babble On' -- the infamous 'Journey to Babel' musical spoof. Laugh your way through eleven songs, explosive ambassadors, and chicken a la Shatner. Damned Indians! 'A Vulcan Tea Party' -- Amanda's first job on Vulcan, a stepping stone to the career she'd trained for. Sarek is supportive and extremely encouraging. Spock wishes his mother would just stay home and out of sight. A sneak peek into a new ST universe by L.L. MacLeod. 'The Fanzine Writers Sketch' -- as performed at Starbase Baltimore and Star Con Denver '81. Plus much more." [2]

From the Zine's Preface

In the beginning, there was "A Mother's Observation," written in 1967. Even as TREK travelled through its second season, the phenomenon of fandom began as individuals started paying attention. Then came the conventions. August Party (1975) was notable for its mascots, the Spocketeers. A large portion of LIAPITA's contents were written for the conventions: at the last of the good-old days NYC cons of 1976, The Star Fleet Academy Marching Band and Glee Club won the performance category at the costume call with its rendition of "NBC. "Trek Around the Clock" received honorable mention in the song-writing contest at that same affair as did "Star Fleet Life." August Party '76 was to have showcased a full-length musical parody of "Journey to Babel" known as BABBLE-ON, BABBLE-ON which was eventually withdrawn from the program due to a lack of financial support. However, frequent requests for BABBLE-ON have since resulted in a long-awaited recording. In 1980, "The Fanzine Writers Sketch" was included in the entertainment at Starbase Baltimore, followed by an encore performance at StarCon Denver a year later. Also written for Starbase Baltimore (but never performed) is "Ship's Business," a sketch meant to be sequed into by the costume call emcee without any prior warning to the audience. Not limited by the visual demands of BABBLE-ON or "Fanzine Writers," "Ship's Business" adapts well to reader's theatre. The costume call at Trekadaze 1981 centered around the biblically-toned "Genesis, Too? The Word of the Bird" (utilized here to introduce the various segments of LIAPITA), punctuated by the inane mop-and-broom choreography choreography of "It is a Redshirt Life". The list of song parodies could go on and on whether they pay tribute to specific episodes, characters, or even to the actors themselves. Separate, but certainly equal to the works meant for performance, are the short stories and poetry. Included in LIAPITA are both the first and the latest of the delightfully inane KREPE PAPERS, "Popeil" and "Perrier." (Other titles include "Vrroomm," "Muu-Muu," and "Warp-out." ) In the KREPE PAPERS, the reader finds a perpetually confused Sarek and a less-than-sedate Amanda always behind the bewildering events. On the serious side of illogic are various poems,"A Work of Art," and "A Vulcan Tea Party," one of a series of stories dealing with the role of Amanda and Sarek in the development of their son's personality. Through story and song runs a consistent thread of illogic, pointing out the touch of humanity in even STAR TREK's aliens. As for logic itself, it has always been a pain in the @$$.

Some of the most powerful stories I’ve ever read in zines are about very minor characters. A good story about minor characters is ‘A Vulcan Tea Party’ by L.L. MacLeod in the zine ‘LIAPITA.’ This story concerns an episode in Spock’s childhood when Amanda faces a professional and personal crisis in her life on Vulcan. It is very moving and one of the best ST stories I have EVER read. The whole zine is good, with lots of funny stories, including ‘Babble-on, Babble-on (a musical spoof on ‘Journey to Babel’ and ‘Fiddler on the Roof’). There are several funny filk songs as well as some poetry and artwork that is outstanding. Dusty Jones has her own story in ‘A Work of Art,’ a very moving piece about Spock and Sarek coming to terms with each other. She also did the very funny 'The Krepe Papers' as well as the play ‘The Fanzine Writer’s Sketch.’ I liked this so much that I immediately wrote urging Dusty Jones to do a sequel (entitled True Vulcan Confessions). It still is not out yet, but the wait will be worth it. [3]