You may be looking for the Star Trek: TOS zine, Speed of Light.

Lightspeed is a Star Wars zine by Tim Eldred. There were two issues, plus one mini-issue. 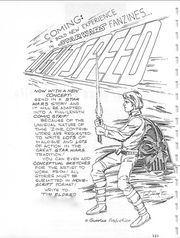 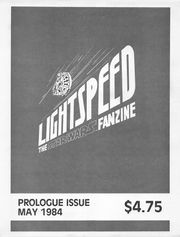 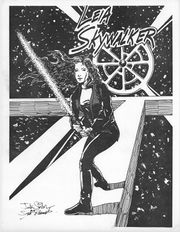 back cover of Prologue Issue

Lightspeed - Prologue was published in May 1984 and contains 100 pages. From the title page, "Lightspeed: The Prologue is a one-shot Star Wars fanzine meant to preclude subsequent issues that will be published at three or four month intervals."

The summaries below are from the title page.

"And now for something completely different!" I think I first saw Tim Eldred's work in a copy of Noids & Droids. I had been a comics fan most of my life, and it was a pleasant surprise to find a SW fan who was also a comic artist. Star Wars is primarily a visual story, and comics are a visual media. Comics fandom and media fandom sometimes seem to have different esthetics, if for no other reason than one is populated by men, and the other by women, but Tim Eldred's style and editorial influence seem to hit a perfect medium. Hybrid vigor, I suppose. The first story is Eldred's "To Hunt a Jedi". Bib Fortuna has taken over Jabba's organization (an organization somewhat vaster than we expected) and has sent out a bounty hunter to capture Luke Skywalker. The bounty hunter Fortuna sends is: (a) a cyborg; (b) a former Jedi Knight and (c) apparently insane. His name is Scarab, and Eldred apparently has plans for this character, so we'll be seeing him again. "The Last Moon" by Dave Gifford is a dark tale that explains how Darth Vader escaped from the Yavin System at the end of ANH. Darth must come to face the people whom he marooned on the last moon of Yavin, one of them being Balen Lars, the man who helped his wife escape to Alderaan. "You Can't Go Home Again" by Andrew Pepoy is the story of a Stormtrooper who attempts to desert. The title is self-explanatory. Jim Emelander and Tim Eldred collaborated on story and art for "Knight to the King". Luke Skywalker allows himself to be taken aboard a prison ship so he can rescue a king. But the king doesn't want to be rescued. Luke picks up an ally along the way, one by the name of Harok, a man who suspiciously resembles Zaphod Beeblebrox's left head.

One of the few nonstory features, and my favorite, is the "Mechanical Section; Blueprints and Schematics". There may already be plenty of information on the subjects included, but you probably won't find a more concise and consolidated rendering anywhere, including the pro sources.

Although Tim Eldred's work isn't the only stuff in Lightspeed, his takes up 3/4 of the zine. His style has steadily improved, as well as his technical skill. I do have a problem with one thing, however; there is too much similarity in his faces. Some characters can be more easily identified by their clothing. Nevertheless, Eldred is, undoubtedly, destined to go pro someday. I suppose I should restrain my praise of Lightspeed in order to avoid the 'Greatest Joke in the World' Syndrome. But the fact is that this zine is perhaps the most innovative, refreshing thing to hit SW fandom since its inception. It is cleanly printed, intelligently layed out, and the stories are damned good to boot! If it isn't at least nominated in the Fan Q Awards next year, I'm going to be mighty disappointed. Final Analysis: This should be the next zine you buy! [1]

Prevue Issue was published in May 1985 and contains 8 pages. It has, according to comments in the August 1985 issue, the first part of a story by Scott Rosema called "Blasphemy Among the Stars."

Lightspeed 1 was published in August 1985 and contains 96 pages. 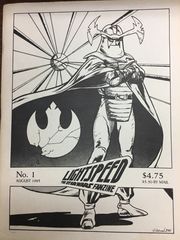 From the editor: "It is with deep regret that Scott Rosema fell under time-constraining circumstances beyond his control and was unable to finish "Blasphemy Among the Stars" in time for this issue's release. Thus, contradictory to the material that appeared in the eight-page LIGHTSPEED PREVUE (May, 1985), "Blasphemy" will be printed in LIGHTSPEED 2 in early 1986. We apologize to those anticipating its appearance here, but "Blasphemy" is well worth the wait."

Ifs been just over a year (as of this writing) since the premiere of the UGHTSPEED PROLOGUE issue, and with this, the first "official" issue, the series is off and running. And it's going to be something special.

For not only will LIGHTSPEED continue to offer exciting stories, outstanding artwork and features you just won't find elsewhere, it will feature a continuing serial I like to call THE NEW EMPIRE SAGA. This saga began in the PROLOGUE with TO HUNT A JEDI, which took place soon after George Lucas' RETURN OF THE JEDI. The NEW EMPIRE SAGA will run in ten main installments (of which this issue's story is number 2) and will in-coorporate supplemental stories that are scheduled to appear here in the future. The supplements will remain as separate stories, but will feed new elements into the main ten and serve to round out the entire saga. In the interest of chronology, these are the stories that have appeared in either the PROLOGUE or this issue and have something to do with the NEW EMPIRE SAGA:

3. Before the Storm (installment 2)

4. Knight to the King (supplement)

Don't get upset if this list confuses you or if it doesn't seem like all the plot details are accounted for-rhis is still the very beginning of the saga, and everything will come together in due time. In order to make things simpler at this point, just remember that the ten main installments are written and drawn by Tim Eldred and the supplemental tales may involve other artists/writers.

Some stories that I have written in the past for other fanzines will also be incorporated into THE NEW EMPIRE SAGA but will not be considered any of the main ten. These stories will be reprinted in LIGHTSPEED as becomes necessary to preserve continuity. (Example LITTLEST BOUNTY HUNTER).

Stories that do not fit into the NEW EMPIRE SAGA will appear here on occasion, as well. These include YOU CAN'T GO HOME AGAIN (from the PROLOGUE issue) and SHADOWS OF THE PAST (from this issue). Continuity notations will be made whenever these "sundry" stories come up. Everything make sense? Read it over again-I'm sure it will eventually.

A few thoughts on the idea of a continu-ing series and erratic publishing schedules: while it is true that it can become a royal pain to follow a series that only appears two or three times a year, it is also true that the advantage of continuity makes a story much more enjoyable. American television is a prime example. For although most TV programs run on a weekly basis, the "formula show" has become a consistent problem with almost every series, and programs that concentrate on constantly moving a story forward are always the most popular. Think about it-everyone's favorite episodes of a series involve important changes or plot introductions. This is true for such shows as M*A*S*H, BATTLESTAR GALACTICA, HILL STREET BLUES, STAR TREK, and even V. The "formula" episodes come and go, but the "change" episodes endure forever.

This was a primary motivation in beginning THE NEW EMPIRE SAGA The idea of a series with as much to tell as the STAR WARS movies, and LIGHTSPEED as a vessel for continuous outlet formed a perfect match. Nothing has ever been attempted on this scale in a fanzine, but it can work if the demand is there. Feel entirely free to send in your comments on what has been presented thus far, and your thoughts on the subject of a continuing serial. Both are valuable to me as creator of THE NEW EMPIRE SAGA.