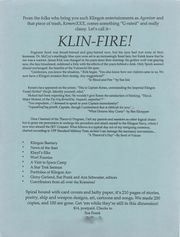 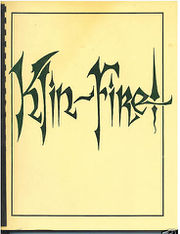 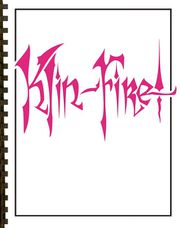 another version of front cover by Inzar 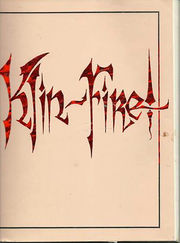 yet another version of the front cover 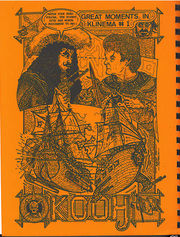 This all-Kingon zine is required reading by the Klingon High Command... or else. Loads of stories and a free bookmark. [1]

Kai Kassaif: If you don't recognize the above phrase and have no knowledge of or affinity for the pro novel in which it appeared, then this zine is already over your head. On the other hand, if you are at heart a targ-cuddling, komerex zba-playing, Feddie-basher, then this is a zine for you. In other words, this is a zine devoted entirely to our friends, the Klingons.

Klin-Fire is an anthology stuffed full of fan work of every description: stories; art; filks and poems; glossaries; timelines; puzzles and cartoons; descriptions of Klingon weapons, ships, and animals; one book review, and even a copy of a 7Vefc-related sermon given at a Unitarian church. As is typical of collective works of this sifce and scope, the quality of the material varies from the abysmal to the sublime, with examples of all the shades in between. I commend editors Ginny Garland, Sue Frank, and Ann Schwader for the obvious care they took in assembling this sometimes motley assortment of works into a clean and attractive overall package. Text is printed in a very legible, laser-quality typeface with a minimum of errors. A simple line border surrounds each page. Even the rattiest sketch is given tender attention and placed in a supportive frame of text or line.

This brings me to the art. Faced with the vexing "quality or quantity" dilemma with which all zine producers must wrestle, Klin-Fire's editors chose to go with a quantity of art. This means that the bulk of the art is hack work.

Artists, pause with me a moment, and take the "Am I a Hack?" quiz: 1. Could Crayola produce a stencil set that would allow a normally coordinated ten-year-old to reproduce your "style"? . 2. Can you erase the hair off your old portraits of Kirk and recycle them as Picard? 3. Could you win a game of "Illo that Story!"? The game plays something like this: Contestant #1: I can illustrate that story after having read only one page. Contestant #2: I can illo that story after seeing only one paragraph. Contestant #1: I can illo that story from only ten words. Contestant #2: I can illo that story in five words. Contestant #1: Illo that story! Observant readers will deduce from the fact that I can formulate these questions that, yes, I, too, have sinned, and fallen short of the glory of Jean Kluge. However, I am still compelled to say that the galloping mediocrity of the majority of the art in this zine brings the quality of the entire product down. The stories in this anthology deserve better than art that looks as if it was churned out in stacks overnight. Mark Feeley's and Robert Jan's drawings had the power and drama appropriate for a Klingon zine without succumbing to the temptation of becoming comic bookish. Too many of their fellow artists, however, did not resist.

Before I leave the subject of art, I want to comment briefly on Klin-Fire's cover. The design is a simple, yet striking calligraphic rendering of the title done in large, dark blue foil letters on a light blue background. My question is this: blue on blue? For a Klingon zine? Since there's no background art to worry about, why not go with something bolder? Gold or red foil letters on a red or black background would have screamed Klingon from across a crowded dealer's room...and this is a screaming Klingon zine if I ever saw one.

On to the fiction. As I indicated earlier, I thought the stories were great. The general level of storytelling ability among the writers is remarkably high for an anthology zine. I can think of no single piece that I would label unacceptably amateurish or clumsy. I remind you, though, that many of the writers assume that their readers are familiar with concepts discussed in John Ford's The Final Reflection AND have studied the Klingon modules of FASA's Star Trek role-playing game AND speak Klingonese as a second language. Few concessions are made to the novice. To illustrate this stylistic density, here are two excerpts from the story, "What Dreams May Come," by Ben Kloepper-easily my favorite author in Klin-Fire: "My young Captain, Qel} When he returns to Klinzhai, he will no longer be a Captain, nor, indeed, mine. After this incident we will no longer offer him the privilege of an opportunity to die in battle. Yet your sister remains his consort, yes? The one has heard talk of marriage plans. It will be up to you to either change that, or provide him with some sort of facade of batlqoq> for the sake of your House. I wash my hands of him, and your useless vendetta as well. I have enough real problems.'" " After attacking Keran's ship, K'unsi'id's black ship had not returned. Perhaps the black ship had gone on to the Black Fleet. That's how the log would read. The Black Fleet. Did all Klingons fight together in the Black Fleet, or did Triangle Klingons have a Black Fleet of their own? Mokad decided that he was in no hurry to find out."

Although all the fiction is about Klingons, each writer takes a slightly different view of Klingon culture. I found all of the stories to be competently written. However, I have decided against going through and rating each one, because I feel my reactions are too idiosyncratic to be useful to a potential buyer. I have, through my reading over the years, developed a vision of what Klingons are like and why they do the things they do. I preferred the stories that came closest to echoing my own opinions on these questions. The darker the mise-en-scene the writer creates, and the more byzantine the plot, the better, in my opinion. However, this view of what makes a good story is not universal among Klingon aficionados. Nor is it the only view represented in Klin-Fire. And frankly, I'm not brave enough to risk the terrible wrath of an aggrieved Klingon fancier who might be aroused to battle-anger by my calling his or her favorite character in the zine a weak-kneed, pseudo-tera'ngan, kuuve-hearted, tribble-dreading wimp.

Packed around these stories are pages upon pages of what can only be categorized as Klingon miscellany, including a Klingon beastiary and two "Warrior Woman" portfolios. There is a report on various Klingon and Federation characters written from the viewpoint of a Klingon psychiatrist, and a non-fiction essay, entitled "First Klingon Graduates from Space Camp!" There are Mongol poems, a poem in French, and even a poem written in Klingonese, Klingon script, and English. There is a showcase of Worf cartoons, and there are chronicles of Targy, a lovable targ; Kamma, a Klingon comedian; and Stort of Vulcan, a comic tharavul (if you can believe that). The most I can tell you in the space 1 have in which to do this review is that these shorter works range from the marvellously ingenious to the stone stupid.

This wild variation in quality makes my final task as a reviewer difficult. How do you rate a zine that has elements that merit a goodly little grove, and other elements that don't deserve a little piece of bark? I would unhesitatingly recommend Klin-Fire to a fan of Klingon culture. It's a lot of zine for your money. There will definitely be something in it that will interest and/or amuse you. I would not recommend Klin-Fire to a newcomer to Trek fiction, or to someone whose heart lies more on the near side of the Neutral Zone. If you dislike or are unfamiliar with the source products referred to by the creators of the zine, you will find too many of the contents tedious or inaccessible.

The overall production values of Klin-Fire are above average for this type of anthology zine, although I do fault the editors for not exercising more discretion by rejecting several pieces of substandard or mediocre material. I was sorry to read that this zine is intended to be a "one-shot." I think this team of editors and writers easily has the potential to put out "five tree" quality work.

In the final analysis, because of its grab-bag quality, I have to give Klin-Fire three trees. But understand, gentle readers, this is a three with a bullet-actually a forbidden 3.75, only fingertips away from a four, and with elements that I'd almost give a five. In other words, while I don't think Klin-Fire is a zine that anyone will want to put on display in a glass case, it is one that would end up as a well-thumbed edition in any Klingon-lover's collection. [2]