Karen & Leonard: A Monochromatic Romance is a 45-page anthology of art and poetry in honor of Leonard Nimoy by Karen Flanery. It has the subtitle "Love Story in Black and White." 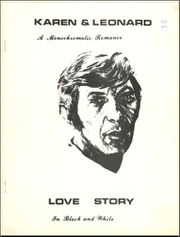 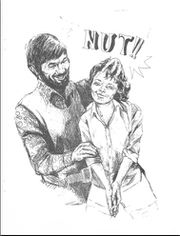 It is RPF as well as a tribute. Most of the art is also self-insertion. A similar zine is Don't You Just Love Leonard Nimoy?.

Like some fanzines of that era, the zine was published without the required pre-1989 copyright notices, possibly placing the fanzine in the public domain. 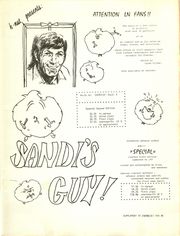 This flyer was printed in Energize! in February 1975, and shows the zine's original title.

According to a flyer inside Energize! and an announcement in Interphase #1, this zine was originally to be titled "Sandi's Guy." [1] This turned out to be a mistake, and there was a retraction along with the correct title, in Interphase #3.

In 1972, Karen wrote a story for Tricorder Readings called "Wednesday, Wednesday." It was in response to editor Regina Marvinny's contest asking readers to write stories speculating what it would be like to meet Leonard Nimoy. In Karen's version, the fairy-like "Nimoy Watchers" magic him to her house, where he has breakfast, and meets her kids, learns about watchers, and her Hobbithole.

From the "eddytorial" of Karen & Leonard: A Monochromatic Romance

...it is a trip into ego, if you will It's a love affair. Aha, don't snicker. I mean it. I hollered aloud and long, unabashed and unfazed for many a year that i would just dearly love to take Leonard to my lil bed and play with him. Now you may blush and say, -- my heavens!!!...

... Am i corrupting the minds of the innocent? Hardly. I should hope that in this AGE of budding self-consciousness, people are beginning to realize that affection is affection--and doesn't stop with a discreet curtain over a tender scene to two people gazing at one another's eyeballs...

.... It's as normal as ordering a hamburger to go with a milkshake. This is what i am after with this fanzine. Admitting that an affection toward a celebrity is as normal as ordering that hamburger and milkshake. No one is sick because they feel an honest feeling toward someone that gives them joy. No one is sick because they want to share the adventure of life and living and learning with someone. To the contrary, i suggest that this is rip-roaring health...

A small sampling of the very extensive art.

"Karen & Leonard... A Monochromatic Romance (Love Story in Black and White)" is a collection of some of the best poetry and artwork to come out in a long while.

First, I must state a few things before beginning on the details. I have never been much of a Leonard Nimoy fan. I also have never thought overly much of Karen Flanery's work upon seeing individual pieces. (She's very good, but not the best in fandom... that kind of stuff...).

This zine very different, and very special. You don't have to be a Leonard Nimoy fan to enjoy this zine, it speaks for itself; stands alone very well. There are four poems [2] at the beginning and the remainder of this zine is filled with approximately 40 full page sketches. The drawings are all printed well, and the on only one side of the paper. Individually they may not be much, but together they fit to form a beautiful experience, what Karen calls a trip into ego. It blends imagination, originality, fantasy, humor and charm. The entire thing combines to form a work of art. It was one of the most impressive zines I've seen... I must be honest, though, there is little to read in this zine aside from the poems and the editorial page. This is not a zine to read so much as it is a visual experience. It is also very much a Leonard Nimoy zine and not a Spock zine. This is a unique one, folks. Bewitching would describe the effect it had on me, but get your own copy and see. [3]