Kaliffee is a slash K/S Star Trek: TOS anthology. The name of the zine comes from the Vulcan term used in the episode "Amok Time," and means "challenge." 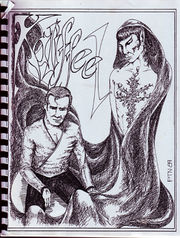 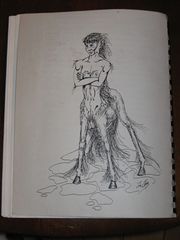 back cover of issue #1, Deb Lewis

Kalifee 1 was published in December 1990 and contains 168 pages. Cartoons by Deb Lewis.

From an ad for the first issue:

This 'no-holds-barred' first issue boldly goes to the final frontier with: "A Gift Beyond Price": Spock finds gainful employment in a Pleasure Dome when he is kidnapped, and James T. must rescue nim; two follow-up stories -- one to "Mirror, Mirror" and another to "City..." in which Kirk vacations with Spock on Vulcan; and a hurt/comfort novella by Mallett! [1]

See reactions and reviews for The Ending.

See reactions and reviews for A Gift Beyond Price.

See reactions and reviews for A Debt Repaid.

See reactions and reviews for This I Would Give.

[cartoons]: The cartoons by Deb Lewis were superb. My favorite was "Energizing now...." She has a touch of class for these cartoons were funny without being dirty, but most certainly were K/S. [2]

This zine has some very funny obscene cartoons and a couple of entertainingly bawdy filks ("But His Cock Stayed Stiff"). Sadly, these are its high points; the writing is not noticeably edited. 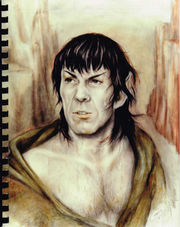 cover of issue #2, subtitled "Interlude," artist TACS. One reviewer wrote: It's like a beautiful painting....ancient....Vulcan times...stunning... [4] 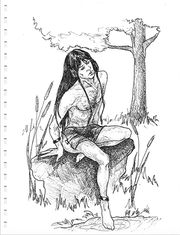 the single interior illo is by TACS

Kalifee 2 is subtitled, Interlude. It was published in 1993 and contains 184 pages.

Its fiction is all by C.A. Mallett and the cover and the single interior illo is by TACS. It was edited by Betsy Fisher with Bill Hupe and Peg Kennedy acting as agents and distributors.

Summary from Media Monitor #34: "A genetically engineered Vulcan woman teaches Spock in the Vulcan desert about where his true emotions lie; Sarek, Amanda, and McCoy learn to accept Kirk and Spock's relationship; T'Pau orders Spock to return to Vulcan to be assigned a mate, and two other stories. The first 150 copies feature a full color Spock art print by TACS as the cover."