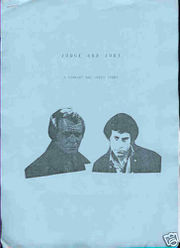 Judge and Jury is a gen Starsky and Hutch 29-page novel by Janet Ellicott. The author calls it a wallow zine in an ad in Universal Translator.

After all the comments in the Letterzine about zines, criticisms of zines and criticisms of writers, I'm almost afraid to say it but here goes. I've brought out my own zine. It's very short, only 29 pages, but that does make the postage cheap. Called JUDGE & JURY, it's just one story by me, my first attempt at an S&H story, though not my first fanzine story by any means.

Parodied in a Skit

No doubt zines debuting at this con will incorporate many of these themes in them, or will link up episodes or commemorate previous stories. I myself intend to give Jane Ellicott' s Judge and Jury a sound parodying with "Fudge and Fury" over the weekend. But after all, why not? When we are in front of a gold mine, foolish is the one who doesn't dig it. [1]

Supreme tackiness seems to sum up the contents of this single-stapled masterpiece. J&J is not, as one might expect, a poorly written action/adventure story or a story of revenge or even a hurt/comfort tale. It can be more appropriately described as a blood 'n' guts non-adventure or a torture/comfort tale. In a story of thirty pages, S&H suffer (and, boy, do they ever) from page nine through page twenty-seven. The reader, by the way, suffers the whole way through. It's really suffering, too, gang. This story includes agony that runs the gamut from sexual assault (the beautiful blond gets it in this one, but details are mercifully left out) to Starsky being beaten with a tree branch (see page 23 if you think I jest). What I want to know is why do this to characters that you love? Why hurt them like this in order to get them to touch one another? It is possible that every S&H cliche was used in this zine, and for this the author should be commended. Perhaps the author can best review her story when she says on page 28, 'Every one was glad to see the back of them when they left for home.' So, too, with this zine. The sight of the back cover was a real pleasure. [2]

Probably, though, fandom began in Somebody's mind as an answer to the questions: what'll I do with my time? my money? my postage stamps?

Soon afterwards, Somebody Else got the idea to publish S&H stories as written by unknown authors in things called fanzines. Fanzines are not run by electricity nor do they cool the air. They are entertaining, however, usually, anyway, with the possible exception of JUDGE & JURY, on which the verdict is Death by Mimeograph, and BIRD OF PARADISE, which has flown the coop (as has my deposit.) [3]

A bad solution is to make the entire story a sequence of frisson-jammed Good Stuff, as in Ellicott's "Judge and Jury." This is bad for several reasons. One, the reader reaches a limit of credulity. With hurt/comfort Good Stuff, in order to build tension, each succeeding piece of jeopardy within the story has to be rougher or more threatening than the preceding one, without actually killing or maiming the boys permanently. And since we know perfectly well the villain won't be allowed to croak either man or to chop off important bits of them, once he gets to the point of actual mayhem, all he can do is threaten a lot. [4]

Well, when I first discovered S&H fic I didn't think there was such a thing as TOO MUCH of anything...especially H/C. But unfortunately there is. I've learned that a little goes a long way. Too much can turn a good story into something laughable. I'm thinking of "Judge & Jury" as an example of waay too much.

We did Judge and Jury once here as a discussion story, and I remember re-reading it and shuddering all over again. There is no way either one of them would have survived that, and where was the comfort? There was precious little of that in between all the massive hurts. Another issue I have with it is how British it all sounded. It felt like we were in London and not L.A. [5]