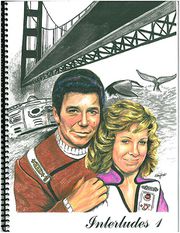 Description from a 1995 Submission Request Flyer

Fiction, art and poetry submissions are now being sought for Interludes, a redesigned and redefined version of the Classic Star Trek issues of Idylls, the popular Orion Press fanzine featuring stories of romance and family.

Interludes will feature tales of the Enterprise crew during the intervals of their lives before, during, between and following their missions exploring the Galaxy. We're looking for stories showing what the various crew members do when they're off duty aboard ship, on shore leave or otherwise off ship. We're also interested in stories of the characters' childhoods and retirement years and events which occur during the time periods between the various aired versions of Trek (i.e. between the five-year mission and V'ger or between V'ger and Khan). As with Idylls, these may be stories of romance and/or family. They also may be light, humorous stories about any of the many ways the crew unwinds — at play on the recreation deck, at holiday celebrations on while enjoying R&R.

Stories may range from G to R rating (No X-rated or slash material, please.) and can range in tone from light comedy to poignant or bittersweet drama.