In the Belly of the Whale

In the Belly of the Whale is a gen (but allowed slash as a topic for discussion) letterzine.

There were at least four issues. 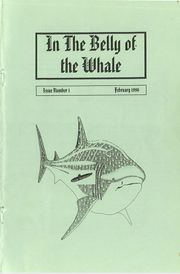 Another Voyage to the Bottom of the Sea letterzine was Up Bubble.

From the First Issue

WELCOME to "In the Belly of the Whale". We started this new venture for the sole reason that we wanted to meet more VBS fans and converse about our fa orite show. There will be few editorial "rules", since we believe in the Star Trek philosophy of IDIC (infinite diversity in ininfinite combinations). In other words, we believe that everyone isentitled to her/his own opinion, and each opinion is valid. We present this new forum as a place where fans of "Voyage to the Bottom of the Sea" can discuss all aspects of the show and its actors -- DISCUSS, not argue. No fan has ever changed another fan's mind about anything by calling her/him insulting names in a letterzine.

In the Belly of the Whale was published in February 1996 and contains 23 pages.

In the Belly of the Whale was published in June 1996 and contains 38 pages. This issue has an extensive credit list for the actor David Hedison. 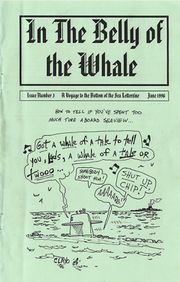 cover of issue #3
Regarding cultural differences:

... 'we British' don't all necessarily find distasteful the stories suggesting that Lee Crane had a traumatic childhood. It's a point of view - not necessarily one with which I agree, nor for which I see any basis - but which I still find an interesting concept. Though, to be fair, I haven't come across that many stories which made the point that strongly.

On the subject of the British, I'm curious as to what Ima Fan means when she describes the English (could we make that British, please?) style of writing as having no specific point of view. Maybe I've missed something, but that lost me. (Hey, I sense an on-going discussion looming.)

Voyage was a terrific idea that could have been as Star Trek once. If Irwin Allen had left it alone and given those involved greater power with its production, I think that what you see in First Season would have still been its format in Fourth. But Irwin could not leave the show alone. He was always tinkering with it, and always finding ways of saving money, which resulted in great chunks of previous movies - and worse, earlier episodes - being used to pad out, and the monsters from Lost in Space turning up, thinly disguised, in Voyage.

In a way, I'm glad now that Voyage isn't Star Trek. For one thing, I would be bankrupt several times over buying all those enormous houses just to keep the memorabilia collection! Secondly, I am now seriously tired of the hype, and the cloning, which has resulted in glossy shows like Babylon Five and Seaquest DSV. Thank goodness for The X Files, my current favourite (but still never to top Voyoge!) and so different. Although it is also starting to get a bit over-hyped in this country, and I suppose the same must be true Stateside. I still like the original Star Trek and the movies (except the last one and No. 2), and I like Picard of Next Generation, but I found I got bored with the show and subsequent clones. At least the original was still a little rough around the edges! The later ones are all too, too smooth.

I don't think the Voyage production values were poor. I think they were excellent for the time (you should see first season Episodes of The Avengers, with Honor Blackman in - they are really rough!), but perhaps spoiled by the overdoing of the rock 'n' roll, or the rather silly monsters - such as the nasty sharp pointy teeth on the giant man in "Leviathan" or the werewolves in "Werewolf and "Brand of the Beast". For many years, all I had of the latter was a sound tape, and I listened to it frequently because the scene before Nelson changes, where he is sounding so tortured, was very good. Then, in 1982, I got my first videos of the show, and say the pointy teeth, which make the monster silly rather than scary!

A fan being fannish:

I love live theater, and I would particularly love to be able to see David on stage, since he is such a good actor and definitely a favorite of mine. If he would only get a little closer to Sacramento! Or, if that elusive winning lottery ticket would finally ar rive. When that happens, believe me, I'll be on the first plane to see David perform. A favorite fantasy is to be able to rent a hotel room for the entire run of the play, and be in the first or second row every single night. I know that probably sounds a tad excessive, but I think it would be a fabulous experience. Live theater is never the same twice in a row, and that's one of the things that makes it so much fun and enjoyable.

The closest I've ever come to doing something like that was about 10 years ago when I went to Las Vegas for a week to see two of my favorite singers. The Everly Brothers, and I saw 10 concerts in a row. Fabulous! Each show was slightly different. Even longer ago than that four of us fan friends journeyed to Los Angeles (back when we were all living in Texas) to see Paul Michael Glaser in two consecutive performances of a wonderfully funny play called "The Lady Cries Murder", and we were doubly thrilled when David Soul appeared in the audience for one of the performances (the only time he saw the play).

I spent half my time watching Paul on stage, and the other half watching David Soul watch Paul. Treasured memories!

Thank you for sharing:

Since starting my quest in Voyage to the Bottom of the Sea a little over a year ago, I have been reminded a number of times about what fandom means and why it's so important to me. People I've just met have loaned me out of print zines from their libraries and other people have provided hard to locate videos. To each of you, my warmest thanks. Elaine and I have enjoyed many hours of entertainment be cause of your generosity.

Since my encounters with fandom began almost twenty years ago, I have had my life enriched by the many people I have met. To think we started with an Interest in a television show and discovered we had many more things in common. I have entertained people in my home from all over the U.S. and had guests from England, Australia, and Israel. I have had the pleasure of being a guest in many homes, sharing stories and episodes and having fun.

Freedom of speech and choice:

In the spirit of IDIC, I would like to pull my soapbox out for a paragraph or two. There are in this and other fandoms people who are offended by the fiction I write and the stand I take on gay rights. It is not my wish to offend or demand that mv fiction be read. I ask only for freedom of speech and that all humans be accorded the same rights. I am offended by the gross and gratuitous violence present in today's movies and television. I exercise my right not to watch those shows and avoid the products of advertisers who sponsor them. When I think the line has been crossed, I exercise my right to express my views. However, I make it a point never to condemn a movie I haven't seen.

If you wish to discuss gay rights with me, I will be happy to entertain all arguments except quoting the Bible. I may have been raised a Southern Baptist, and studied the scripture in great deal, but I have never been able to accept the writing as anything more than a history of the Hebrew people. Please bear in mind that freedom of religion means freedom to have no religion.

In the Belly of the Whale 4 was published October 1996.

So, come on guys! Let's hear what you have to say.