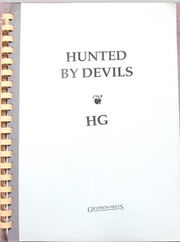 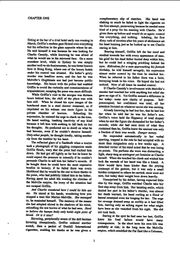 Hunted by Devils is a slash 160-page novel by HG. While it is sometimes called a Professionals novel, it actually features the Professionals actor in the show, Cassidy. The zine sometimes appears on fan's Desert Island lists.[1]

From Archive of Our Own:

Hired to investigate a man he believes terrorizes children, Kit Kilroy falls in love... Please note there are references to violence and a scene which some people may find triggery. Hunted by Devils was inspired by the mini-series Cassidy. It’s more than 20 years since I saw the show, watched only because Martin Shaw appeared in it. Alas, he was in it far too little; I found the series deathly dull, with poor production values, a silly plot and a daft and unsympathetic heroine. However, the character he played, while morally and criminally suspect, offered just enough wriggle room to be able to write about. What I remember of the plot is Griffin-centric but might help explain references to characters and events referrred to in Hunted by Devils, which begins shortly after the end of Cassidy. Kit Fallon - is my own creation. Because I’m a fan of the Professionals I envisaged him being played by Lewis Collins, who played Bodie to Shaw’s Doyle.

This novel is about James Griffin from the Australian mini-series "Cassidy"; I loved the novel even before I saw the show. Griffin is a mega-rich sophisticate, but a sad and lonely man. After his father's murder and the ending of his affair with Cassidy's daughter, Charlie, Griffin leaves Hong Kong and goes to England. Meanwhile, Charlie's antagonism prompts a pay-back scheme in which a security specialist, Kilroy--a delightful Bodie-clone--is hired to do what Griffin did to Charlie: make Griffin fall in love with him and then dump him. Complication ensues as both Griffin and Kilroy fall in love.[2]

It's an AU about James Griffin (played by MS in Cassidy) and Kit Kilroy (I don't know where this comes from or if he's HG's invention). They are not Doyle and Bodie, but they have the same tension and chemistry between them that Bodie and Doyle have, and obviously they look like Bodie and Doyle :-), just older. I enjoyed it very much, but then I've never disliked anything that HG has written.[3]

Hunted By Devils is the latest slash novel from HG. It features Martin Shaw's character Griffin from the mini scries CASSIDY. There is also a Bodie clone in the shape of Kit Kilroy.

Griffin is adrift and unhappy. His father's death has hit him hard and when he is disinherited it is the last straw. Making him very vulnerable to Charlie Cassidy's revenge. A revenge which has Kilroy at its centre. Add to the plot kidnap, injury, house renovation, and so on ...

If I have one quibble, it's that throughout the story there are a couple of extracts of poems. It would have been nice if the titles and the authors had been noted somewhere for the curious. Other than that the writing is solid, entertaining, and at times warmly emotional. [4]

I just read H.G.'s new novel.... using the Shaw character from Cassidy, and the Collins character from another movie. I have defended slash characters using condoms before, and expect I'll do it again--especially in Wiseguy, I can't imagine these bright east coasters not [using condoms]--but in this story, she made such a big deal about [condom use], and wrote the first couple of scenes were they put [the condoms] on so clumsily, that I because truly annoyed by it. I want [characters] to use them (when appropriate), but I want it to be unobtrusive. Did anyone see Dragnet? In one scene about 1/2 way through, the younger partner wakes up a little early, and looks over at his girlfriend. He smiles, and sleepily reaches over to the economy box of condoms on his night table. He doesn't find one, and wakes up a little more, rolls over and checks the box more carefully. Again not finding one, he sighs, sits up, and goes to take his shower. The whole thing took less than 30 seconds. (Though in my writing, it is considerably *more* clumsy than H.G.'s writing...) [5]

I'd also strongly recommend H.G.'s wonderful "Hunted By Devils" - not Bodie and Doyle but a recognisable Bodie-figure (called Kilroy here) and James Griffin from the Cassidy series. Their conversation, while not B&D, is just as good as you'd expect from H.G. and absolutely convinces you of the truth of their characters and their intense relationship with each other. Because it isn't B&D, I put it aside for a while thinking it would fill in when I hadn't anything I wanted to read more. Hah! Little did I know. It's beautiful - moving and funny and tense and sexy. If I didn't love "Jigsaw Puzzle" more than anything, "HbD" would be my favourite novel. [6]

It's a great story, complex, moving and funny, where it wasn't making me cry. Even better the third time round, I found. [7]

I thought the author took an interesting character and turned him into a super-hero: wise father figure; furniture designer and patron of the arts? That she turned Charlie into a bad caricature an over the top daytime soap diva villainess: I'm paying Bodie to make Doyle fall in love with him then dump him so he'll know how I felt? [8]

... the Cassidy characters weren't recognizable from their own universe.

.... I'd assumed that the characterization was fairly on, given that Charlie is even _more_ of a psycho bitch in Kathy Keegan's THE CASSIDY LEGACY. (Which has few other redeeming characteristics, I might add snarkily.)

I really liked the idea that everyone in HBD thought Charlie was delusional because she insisted she was being followed -- but she _was_ being followed, even though it had nothing to do with Griffin. [9]

Have you read Hunted By Devils yet? I've just been lucky enough to be able to borrow a copy of 'Cassidy' and now I've re-read this zine and can see that it's brilliant! HG captures the Griffin character so perfectly and also comes up with a plausible format for introducing a 'Bodie,' giving the lads a chance to perform their own particular magic in a different kind of environment. Got to say that this zine is my overall favourite at the moment. I love the way HG always seems to be able to grant the lads equal rights in character development and attention. Talented writer.[10]

... because while it's not B&D, it is darting Kilroy and sexy James, and I love them both too much not to want them with me. Great plot, great dialogue, eh?, sexiest tattoo I've ever seen, and an ending that leaves buckets of room for thinking. 'So what do they do next.. " Many a happy hour of speculation there, I think.[11]

I have to say though...Hunted by Devils is one of the few zines I've ever read that I closed about halfway through and have no intention of ever opening again.

I totally understand that the two characters featured are supposed to look like Bodie and Doyle, but aren't in fact them. I get it. My issue was...

...she chose to make Killroy conveniently stupid (and only for what--a few hours?) just so she could have a reason to introduce conflict into his relationship with Griffin, thus estranging them.

With as savvy a guy as she'd painted Killroy to be and as much as he'd already fallen for Griffin, I in no way bought that a tape produced by someone he knew had it in for Griffin would be able to sway him. The choice was manipulative and not at all in keeping with what we knew of these two men. It made me so angry, I stopped reading pretty much on the spot--and this was my Christmas trip home zine. I had no other fic with me to pass the time. Imagine my horror! *g*

I realize loads of other people love this fic to death, and I've enjoyed quite a few other HG stories. This one though really didn't work for me.[12]

Hunted by Devils is one of my all time favorite zines, and I read it before I'd seen Cassidy. And still love it. After seeing the programme, I was able to really get into the zine for a second read.[13]

This is what we lovingly call a "Not Pros" story in the fandom. What that means is that one of the original actors, in this case Martin Shaw who played Doyle, appeared in another programme called Cassidy. HG took the Martin Shaw character of Griffin and wrote a story wherein she introduced a "Bodie like" character named Kit Kilroy. She gave me what I consider one of my top five Professionals stories in spite of the fact that it's a different universe. Her character of Griffin is very Doyle like and Kit is her embodiment of Bodie in an original character. Please don't let this deter you from reading this fantastic novel. Plus the end has something happen to one of the characters that is one of my favourite small kinks. But you have to read to find out! :) [14]