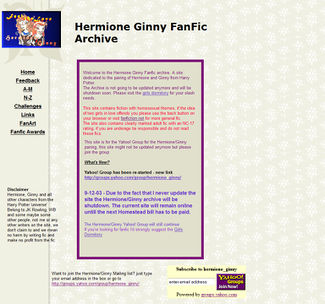 "Due to the fact that I never update the site the Hermione/Ginny archive will be shutdown. The current site will remain online untill the next Homestead bill has to be paid."[3]

The archive hosted a total of 102 stories from the following 45 authors:

The archive posted monthly fanfiction challenges proposed on the hermione_ginny mailing list. It hosted the challenges themselves as well as stories created for the challenge, including stories not posted to the list. Ten monthly challenges were posted, spanning from July 2002 to June 2003, as well as one "other challenge".

The site also included pages for fan art and fanfiction awards; however, these pages were not archived by the Wayback Machine and their content is unknown.