Guy of Gisburne is a character from the Robin of Sherwood TV series. Like all versions of this character in the Robin Hood legend, he serves, with the Sheriff of Nottingham, as the major antagonist to Robin. 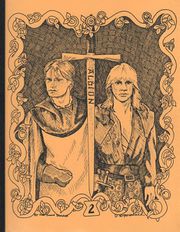 In this incarnation, Guy of Gisburne is Robert (Robin II)'s half-brother.

Back in the day, slash involving the character was forbidden by the Powers That Be, though a few slash stories sneaked in. Stories that pair him with Robert of Loxley are likely enemyslash. Gisburne/Robin II are incest, although the characters weren't aware at first that they are brothers. Gisburne/Sheriff of Nottingham has to deal with an inherent power imbalance and the bloopers contain a few slashy scenes between Gisburne and the Sheriff which are part of the basis for that pairing. 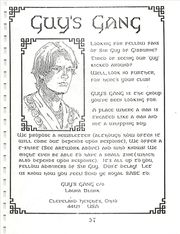 Fanfiction tropes include "Gisburne turns out to be a good guy" and "Robert-tells-Gizzy-they're-brothers".[1]

A proposed zine flyer from 1987, printed in Albion #1, describes Gisburne as a misunderstood woobie:

Looking for fellow fans of Sir Guy of Gisburne?

Tired of seeing our 'guy' kicked around?

Well, look no further for here's your club!

GUY'S GANG is the group you've been looking for.

A place where a man is treated like a man and not a whipping boy. We propose a newsletter (although how often it will come out depends upon response), we offer a T-Shirt (see artwork above) and who knows! We might even be able to have a small zine (which also depends upon response). It's all up to you, fellow admires of Sir Guy. Don't Delay! Let us know how you feel! Send ye royal SASE to: GUYS Gang [...]