You may be looking for the Star Trek: TOS novel, Gaesa. 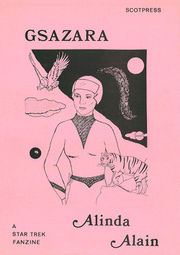 From Media Monitor: "Members of the crew have died, attacked by someone or something unknown... and then Spock is attacked."

From an eBay seller: "When Spock is attacked, the bond between him and Kirk seems to offer some protection. An alien female (Gsazara) describes the culprit, as a man-like-psychic-creature that was left for dead some years ago, alone on a planet."

Note: this is the order in which the stories should be read; as per notes in "A City Without Walls," it is not the order of their publication dates.

This is the third story in a series written by Alinda Alain. She has used the themes of a book (Bethany's Sin) and a TV movie (Amazons), and one of the Star Trek animated episodes, in developing the background of her characters.

The book and the film postulated a race of women who have developed extrasensory abilities and who, because of cruelty suffered over generations, hate men; they have in the past used men to father their children, then killed their husbands - and often their sons, too. In the book and the film, they were defeated, but their spirits survived to take over young girls and so their race continued. Alinda picked up the idea at that point. She moved the women to a planet (Zamaria) far removed from Earth, decided that many of the women would begin to feel unhappy about killing their sons, and the race - still consisting mostly of women - has, by the time of Alinda's stories, begun to develop a culture that accepts men, although their men do not have the abilities the women do. Emigration from Zamaria resulted in the colonisation of Cygnet XIV at some time in the past; Cygnet XIV (which appeared in a Trek animated episode) is also a matriarchy which is a member of the Federation, and any Zamarian wishing to join Starfleet becomes a naturalised Cygnetian. The energy barrier at the edge of the galaxy (Where No Man Has Gone Before) is presented as having been caused by them to provide a prison for those of their number who wanted to retain the old ways; and Gary Mitchell was changed, and given the abilities, simply by exposure to it. In this series, Mitchell did not die at the end of Where No Man...; he was taken by the Zamarians to their home planet, to be trained in the use of his new abilities and given the sense of responsibility that possession of them entailed. However, for various reasons, he could not adjust and remained a rogue talent.

The first story in the series, Gsazara, was actually the second printed and is still in print. It tells how the Zamarians first developed an interest in the Enterprise and her crew. The second story, One Among You, was the first printed and is now out of print. In it, Gary Mitchell kidnapped Kirk, and Spock, with the help of Zsazara (Gzazara's sister) sets out to rescue him; but although they defeat Mitchell, he has not been destroyed; and his jealous hatred of Kirk - and Spock - continues unabated.