Genesis is an audio cassette tape of filks written mostly by Julia Ecklar. She is sometimes accompanied by Leslie Fish. The tape contains some of Julia Ecklar's media fandom performances, including Star Trek, Escape From New York, Sword of Shannara, and Firestarter. 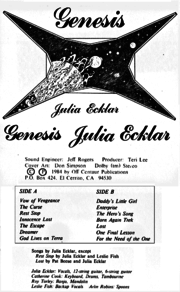 Is anybody else into filking? I just got a tape by Julia Ecklar called Genesis. It has several songs about ST:TWOK. One is "Born Again Trek", which is about her joy (I know it sounds corny, but no other word fits.) in the second movie. But, more importantly for [slash fans], she has a song called "For the Need of the One" about Spock's sacrifice. It is beautiful. If you get a chance, I really recommend you listen to it. [1]

Rest Stop (truly unique, not just because it is one of the only two songs on this tape that is not 'ose' (for those not acquainted with this term, that's as in 'ose,'ose & more 'ose.), but because it's the only Country/Western space trucker song I've ever encounterd... Leslie Fish plays 'pseudo mandolin'... [2]

Born Again Trek (a charming song, especially for those revival trek fans of the Wrath of Khan. The arrangement leaves something to be desired, since instead of the tamborine accompaniment this song so cries out for, jingle bells were used, producing a somewhat ludicrous result, but the song is still fun.)[3] The song is also discussed in "'Textual Poachers: Television Fans and Participatory Culture" By Henry Jenkins.[4]

Daddy's Little Girl (The story is that when Julia sang this song, based on Stephen King's 'Firestarter,' at Chicon #4, all the people in the room looked around nervously to locate the nearest fire exit. While this reaction is more likely during a live performance, even this tape version makes you want to turn down the furnace. Julia's twelve string, with Leslie Fish's added in subtly at times, provides a marvelous piece of music.)[5]

Innocence Lost (is not truly a filk song to my way of thinking. Although it was written for a character in a fanzine story, anyone who's gone through a period of rapid maturity can apply this song to themselves.) (From another reviewer: "In the Alternate Shannara Universe, Allanon was Bremen's natural son. Allanon's mother died at his birth, and he spent his earliest days first at the Druids' Keep, then later in exile with his father in the Westland. While far from perfect, compared to later events his childhood among the great trees of the Westland forests must have seemed idyllic. This haunting song about growing up captures something of how he felt after the Second War of the Races...)[6]

The Escape (based on Escape from New York... While Julia's performance is a delight, the percussion accompaniment is not well done, and detracts as a result.)

Dreamer (is one of the best things to come out of Battlestar Galactica, the recorder part is lovely, but could have been executed better.)

Enterprise (There have been may ships by the same name, and this song postulates that they all possess the same spirit. Lovely song.)

Lost (Julia's music written to a poem by Pat Beese results in a song expressing a feeling so many of us know, that we belong 'out there,' not planet-bound.)

The Curse (is based on a series of stories by Karl Edward Wagner about a man condemmed to immortality. Effective.)

God Lives on Terra (is part of Julia's 'Traveler's mass,' a Mass for the future, not necessarily a religious song, but an expression of love for our home planet...)[7]

The Hero's Song (may be loved by Kirk fans, but to me is the least interesting of the tape.)

The Wrath of Khan Cycle (contains 3 of the 4 songs of the Cycle, the fourth still unwritten. The three songs are 'Vow of Vengence' -- effective, beautifully done. Khan's song. 'One Final Lesson -- Saaviks's song. Lovely recorder part, inexpertly done, but still pleasant. 'For the Need of One' -- Julia's goal with this is to reduce ST fans into weeping little puddles. She succeeds.)[8]

These two filk tapes illustrate the progression of filking. Genesis is the more traditional filk cassette; it was recorded on inexpensive, portable audio equipment with only guitars, drums, tambourines, and spoons as musical accompaniment. Divine Intervention, however, was recorded in a studio with full instrumentation provided by fifteen musicians. But do not hesitate to purchase a home-produced filk tape or one recorded live at a convention; if a cassette is offered by a reputable filk distributor, you are getting a quality product. [9]