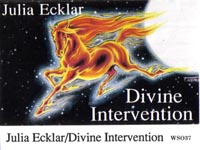 Divine Intervention is widely known as the most expensive filk album ever produced.[1] Julia Ecklar sings, and wrote many of the songs.

Several songs on this album went on to win Pegasus Awards;[2] Lullaby for a Weary World won in 1990 for Best Filk Song, Temper of Revenge won in 1991 for Best War/Vengeance Song, and Ladyhawk won Best Classic Filk Song in 2004 after being nominated in 1987 for Best Filk Song and 1988 for Best Media Song.

Several of the songs on this album have been filked themselves. (It's likely that all these songs have been filked.) Ladyhawk has been filked many times:songs named "Ladybug" and "Ladies' Room" have both been written, and Bob Kanefsky wrote Man/Wolf[3] (with the chorus line, "Lycanthrope, lycanthrope, muscle and musk"). "Temper of Revenge" inspired "Temperature of Revenge," a Star Trek song about Wrath of Khan, from Khan's point of view. 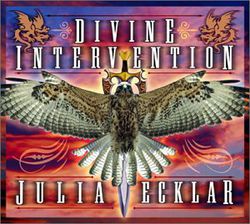 These two filk tapes illustrate the progression of filking. Genesis is the more traditional filk cassette; it was recorded on inexpensive, portable audio equipment with only guitars, drums, tambourines, and spoons as musical accompaniment. Divine Intervention, however, was recorded in a studio with full instrumentation provided by fifteen musicians. But do not hesitate to purchase a home-produced filk tape or one recorded live at a convention; if a cassette is offered by a reputable filk distributor, you are getting a quality product.[4]

To be perfectly honest, before I heard this tape, Julia Ecklar (a fairly well known filker) was little more than a name to me. Silly child [I am]. Her work is powerful stuff, suitable for those who like their music instinctive, emotional, and intellectual. (All this in the same song!) Air Craft Productions have managed to combine Julia's potent lyrics, music, and almost perfect orchestration into one not-to-be-missed package, This is not a convention tape. This is a professionally produced cassette with real paid musicians and excellent sound quality, Not Available In Stores. Most of her work is based on fictional universes, and Divine Intervention includes Ladyhawke, "The Day After," Gene Wolfe's Book of the New Sun, Star Trek, The Karate Kid, and Tanith Lee's Silver-Metal Lover, There are probably more, but I haven't been able to identify them. She seems able to find depth and meaning in some pretty unlikely ways (and places). Occasionally her song is better than the universe it on which it was based. Now for some of the best. "Ladyhawke" is one of my favorites. Exhilarating music and joyful lyrics act to describe the very soul of a wonderful movie. It lifts the heart, cleans the blood, ciears your sinuses, and I swear I could almost feel the cold fresh wind on my face. (Better than a York's Peppermint Patty!) "Burnish Me Bright" is another uplifting song, told from the viewpoint of a mute who, with the help of a 'wizard,' learns to break through her box made of glass' with the magic of mime. This, I think, is the most all-out beautiful song on the tape. But then I always was a sucker for a tear-jerker. "Survivor's Song," 'Tell me that the souls I see, who scream in silent agony, are not our only legacy...' Post WW III. "Temper of Revenge" will have your blood boiling and your adrenaline flowing as a warrior sets out to wreak vengeance on the enemies who dishonorably murdered her life companion. Unfortunately, this song suffers from over-orchestration. I've heard another, much simpler version (guitar and drum) that's much more suitable, if a bit slow. Ah, "Crane Dance." This is the one that's so much better than its inspiration, The Karate Kid, It has an interesting philosophy, certainly one worth listening to. I don't know what "The Hand of God" is based on, but it sounds uncomfortably close to what would happen if Jerry Falweil & Co, had their way. Chilling. Other cuts include an overture to "Ladyhawke!" written by Michael Moricz, a not-so-great rendition of Cynthia McQuillin's "Crimson and Crystal," "Termimus Est," "Fallen Angel" (a moving Trek song), "Lullaby for a Weary World," and others. If you know Julia, have heard her music before, you don't need me to tell you how great this tape because you already bought it. If you haven't, you'll be amazed at the range, strength, and beauty of her voice, and the very high quality of her music.[5]

If you don't like subsiding into rampant emotionalism, don't buy DIVINE INTERVENTION. However, if you want to be moved, to laugh, to cry, and to totally transcend the everyday world, this tape is a MUST. Perhaps calling this a review isn't correct -- for a review has become known as 'criticism." and there are only two things I have to say critically about this tape. One is that upon first hearing, the lead-in instrumentals got a bit long. Two is... I can't remember a second one. Ecklar begins with a filk I've heard on an umpteenth generation tape of a filksinging session, the one called "Ladyhawke!" and inspired by the movie of the same name. As I said above, on first hearing the "Overture," written by Michael Moricz, seemed a bit long -- but that was because I had never heard it with the song before. On second hearing, it was just the thing to introduce one to the soaring of the hawk into the sun. She follows up with two decidedly "fantasy" orientated songs: "Crimson and Crystal" and "Burnish Me Bright." The first was not written by her, but the second one was and both are more than suited to her voice -- which is stunning. The lady enjoys what she is doing, and she does it damn well. Both have an otherworld quality and, if not based on a written story, give the story so well that it will make any writer's fingers itch to write the story for these songs. On second though, how could one second-guess an act like this? "Survivor's Song" is a chilling, scary, sob-inspiring terror about nuclear war and the survivors. In such a war, is it WORTH surviving? Ms. Ecklar haunts us with her words, with almost soul-less, hopeless passion in her words. "Terminous Est" is another song that tells a story from beginning to resolvement, the dirge of a man or woman sword to kill for society's good, but feeling the inevitable prickles of conscience. "Fallen Angel" is one of my favorites. It describes Captain Kirk's feelings upon seeing his beloved ship burn away to ash, and all without saying a name, using the theme music (tho' the music is hauntingly familiar) and with exquisite innuendo. This one did reduce me to tears, and still does after many playings. "Temper of Revenge" and "Crane Dance" are interesting side-pieces for each other, from the cry of a woman who has lost her bonded half, to the youth questioning the 'why's' of balance and growth and power. "One Man Magical Show" is pure fun, a knee-slapping ditty that is a thanksgiving after the emotional havoc the other pieces put you through. And "Silver" is a piece with all the joys of first love-- from what I gather, a woman for her guitar that sings so sweetly. "The Hand of God" is my favorite favorite, perhaps because it raises up emotions of anger, fear, dread, defiance -- you name it, this piece has it! Railing at those who would be a pawn to life, those who would crush the ones they consider different -- this is VERY close to home for any fan, and probably is one of the deepest-felt pieces on the entire tape. And last, but not least, to use a cliche, is "Lullaby for a Weary World." Written by T.J. Burnside, it is a lament to the poor globe we live upon, and how we ravage such beauty with such hate and hurt. Definitely another tear-jerker. Needless to say, if you listen to all of this tape at once, you may have to take several days to recover. It is that powerful and that dynamic. The writing is superb. Ms. Ecklar's voice one that makes this person ache in longing to be able to sing so, and the back-ups., particularly the French horn playing, speak of the wonderful quality and love put into this 'small-press' productions. Julia Ecklar [and] her cohorts are to be highly congratulated. QUality, quantity, and lots of love thrown in. Buy it. Buy it for a friend. Or two. You won't be disappointed.[6]