[1] The First Unofficial Forever Knight Website was created by Gaylin Walli ("Jasmine") in an effort to collate the emerging information about Forever Knight when it was first being broadcast in the United States. At the time, there were no fan-based websites about the show on the web, with only a little information existing beyond what could be found at the Internet Movie Database.

Fandom is a really odd beast. My husband asks me all the time why I manage this information. He knows me better than anyone and even he can't figure out. Neither can I, really.
But seriously, there weren't any sites on the Web that I could find containing information about Forever Knight. Of course, there was passing mention in The Internet Movie Database browser (which, incidentally, is where I got a good portion of the cast and crew credits), but certainly nothing like the other home pages I had seen. So,I put together some information about FK and it took off from there.—Jasmine (Gaylin Walli), from "About this Website"[1]

The First Unofficial Forever Knight Website was originally hosted in webspace provided by the University of Michigan, where Gaylin was a student. After her graduation, it was transferred by prearrangement to Dorothy Elggren, a fellow fan and contributor who had her own website, since Gaylin would be working and no longer have time for the site.[2] The First Unofficial Forever Knight Website continued to be updated until 2003.

An early version of the site from 1997 has been captured by the WayBackMachine.

[...] I don't know why I originally volunteered to provide graphics. Perhaps it was because I was having fun learning video capture, and I wanted to see all those blanks filled in.
And as they say, one thing led to another. There I was, writing down all the epside (sic) information and composing blurbs starting somewhere in the middle of the second season. It was a passion to see this website be what Jas was envisioning.—Dorothy Elggren, from "About this Website"[2]

There is no title on the main page of the site. After all, at the time it was created, there were no other Forever Knight fan sites with which it might be confused.

Nevertheless, as more sites appeared, people needed a way to refer to it. Originally, it was most often called The Forever Knight Home Page. However, underneath the show logo, a headline says, "Welcome to the Knight"; so that was also used as the name for the site. In addition, it was known simply as "Jasmine's site", after its creator.

After the move to Dorothy Elggren's website, newer fans sometimes referred to it as "the Loftworks site", since that is the domain name where it is currently hosted.

Its creator, Gaylin, now usually calls it the "First Unofficial Forever Knight Website" because...well, because it was the first.

In truth, the site has no single proper name. 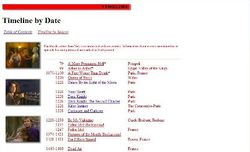 Screen capture of the "Timeline by Date" page on the First Unofficial Forever Knight Website.

The First Unofficial Forever Knight Website has a clean simple design, with a plain white background for each page. On most modern browsers, which have a wide display, the page contents appear shifted to the left, reflecting the narrower width of browsers at the time the site was created. Most pages are headed by a narrow red bar, with the title of the page on the right side of the bar.

Only certain pages are illustrated. The text of essays without pictures is presented in a double column, similar in size to the columns in a newspaper. However, when the page is illustrated, the pictures normally appear on the left with the text on the right.

On the table of contents for the episode guide, each season is accompanied by a picture; and the main cast page similarly has publicity photos of the cast for each season. Each of the "Known Vampires" has his/her picture to the left side of the description. A vertical strip of flashback pictures (again on the left) accompanies the timeline. A large picture of the CD disk (not the cover of the CD) accompanies the Soundtrack info.

The pictures on the "Characters" page are an exception to the usual left-side layout. The small essays on character dynamics are separated by two arrays of screen captures of the human and vampire characters, carefully laid out so that the position of the pictures illustrates the dynamics being described.

The First Unofficial Forever Knight Website was created by Gaylin Walli prior to April 1996. It was initially located at Michigan Technological University (at http://www.hu.mtu.edu/~gjwalli/FK/ and/or at http://www.fa.mtu.edu/~gjwalli/fktoc.html). (The former address is for the Humanities Department, in which Gaylin was enrolled; and the second for the Fine Arts Department, which is in the same building. There was a restructuring of hosting servers at one point and a reorganization of the site at another. There was often a period of dual existence.)[3]

FTP access (to http://www.fa.mtu.edu/~gjwalli/ftp.html) allowed contributors to upload screen captures to the site.[4]

The site was moved from its initial home to its present URL when Gaylin left university for work in the real world. Dorothy Elggren, who had provided a great many screenshots for the website, took over its maintenance at Gaylin's request and expanded upon it. The site was first recorded by the Wayback Machine at its current location in January 1999.

The list of known vampires was the first section of the website; and the episode descriptions were a close second, overlapping slightly.[5] Among the last sections added to the site were the "Characters" and "Quotes" pages. From the Wayback Machine, it is possible to determine that the former was added some time between February and April 1999; and the latter was added by October 1999. The First Unofficial Forever Knight Website continued to be updated until 24 February 2003.