From Fanlore
(Redirected from File-sharing)
Jump to: navigation, search 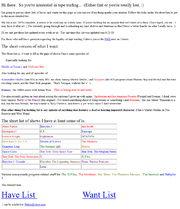 In some areas of fandom, P2P seems to be on its way out.[7] Though distribution methods such as BitTorrent and IRC are still widely popular in anime and manga fandoms,[8] the non-US part of Western media fandom now more often than not relies on other file sharing methods such as direct download links (DDLs) and locked archive video communities to get access to shows airing in other countries.