There was a planned third issue: in 1993, the editor said it had a least one submission. This third issue was never completed.

In 2013, one of the publishers of these zines provided the following history:

"Back in the early 1980's, the Dallas Star Wars fans, loosely called the "Southern Enclave" (which is a whole nuther story in itself) used to get together for parties at my house. This group included Jeanine Hennig, Laura Virgil, L. A. Carr, Ann Wortham, and whoever else happened to show up. Most of us did Star Wars zines. Jenni's was "Far Realms" and this particular year she was doing issue #6. We were all at the exceedingly silly point at one party and decided to do a zine on the spot and everyone had to contribute something under a thinly disguised pseudonym. We had been talking about "Far Realms Six" but it kept coming out "Far Realms Sex" so we decided that everything had to be full of double entendres and thus the first zine was born. The next year, we were all getting our zines ready for that year's MediaWest*Con and I threw one of my parties. We decided to do a sequel. Annie Wortham and I had an ongoing joke between us that included the word "sucks" so we decided that the new crudzine would be called "Far Realms Sux" and everything in the zine had to have that theme. Again, everyone attending the party had to contribute on the spot, although I'd gotten a couple of things from distant fan friends Martie Benedict and Wanda Lybarger.[1]

Far Realms Sex was published in 1984 and contains 12 pages.

back cover by "Nenni Henni"

This zine includes "outraged" letters by fans who objected to every aspect of the zine, calling it shitty, a pitiful excuse for a zine, and tripe. Authors, using humorous pseuds, included Ann Wortham, Cheree Cargill, Laura Virgil, Jenni Hennig, and L.A. Carr.

From the editorial: "This shabbily-produced piece of trash is the product of an illegitimate collaboration between Galactic Winds Press and Falcon Press, neither of which will take sole responsibility. This waste of paper is copyrighted (reluctantly)... and is an amateur (boy! is it ever!) publication which hopefully won't ever see the light of day again."

The zine also includes a "notice" that parodies a canceled zine announcement: "I would like to announce that my proposed "Man from A.U.N.T.I.E." zine ("Change the Channel") will not be printed because I lost interest and because I only got contributors from no-talent hacks... Also, my Western zine, "Gone to Pittsburgh" is now out of print because my mother found the masters where they have falling in the garbage can... and put them out for the trashmen to pick up. Unfortunately, all my records as to who had ordered copies were lost as well, so I won't be able to refund any of the checks for $38.95 each that the 300 or so people sent me. So, don't call me; I'll call you... or if you insist on gettin' nasty, I'll have my lawyers contact you."

Contents of issue one: 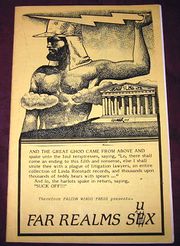 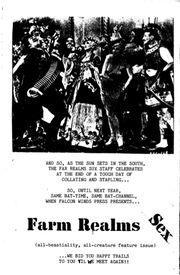 back cover of Far Realms Sux 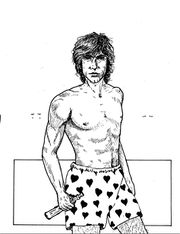 Far Realms Sux was published in 1985 and contains 21 pages.

From the editorial: "Nope, we didn't learn our lesson the first time. Here we are again with the second edition of this piece of crap that gives new meaning to the term "crudzine!" Once again, Jeanine Hennig and Cheree Cargill are forced to take responsibility for this libelous waste of paper and reluctantly copyright it 1985 on behalf of Galactic Winds Press and Falcon Press, so there!"