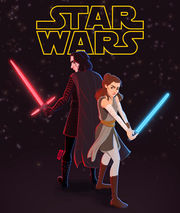 Reylo is the portmanteau used for the het relationship of Rey and Kylo Ren from the sequel Star Wars trilogy. It is extremely popular in the Star Wars fandom—the most commonly tagged ship among Star Wars works on the normally slash-focused Archive of Our Own (AO3), with 25,422 works as of 31 May 2021—and the object of interesting external analysis, even by mainstream media publications. It is a pairing that has also seen fannish resistance and anti-shipping. Rey's unknown parentage meant many were initially fearful that this could be another Star Wars pairing that unexpectedly became an incest ship. (See also Luke/Leia) Others opposed it for other reasons, such as their enemies to lovers dynamic.

The ship surged in popularity after the release of The Last Jedi to become the most prolific ship in the fandom. This film also provided canon confirmation that Rey and Kylo Ren were not related. On AO3, Reylo is the most prolific pairing in both the Star Wars Sequel Trilogy category and the Star Wars - All Media Types category.

A singular Reylo shipper is often simply referred to as a "Reylo", and in the plural as "Reylos".