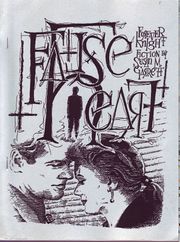 False Heart is a gen 120-page Forever Knight novel by Susan M. Garrett. It won a 1995 FanQ. The cover art is by Ann Larimer. It has a sequel, Kind Soul.

Summary from publisher, "Nick's investigation of the murder of a collector of antiques is interrupted by the appearance of Dorian, the Archivist of the vampires, who's come to collect Nick's memories in an interview. But Nick's got an old score to settle with the Archivist. Dorian has his own agenda, and Natalie's caught in the middle, between false words and false hearts."

Why you should read this: It's been a very long time since I've read any FK fiction, but I remember Dorian. Susan wrote a series of incredibly long, complex, well-plotted stories that include her original character, whom she fleshed out well enough that he's been in my head as an actual FK character ever since. If you like the Forever Knight characters and universe, and you're looking for a good, long read, give this a try. One thing to bear in mind: this was written/posted in 1994, before second season aired. [1]