Essays of Aquarius an original gen SF 128-page novel by Marion Van der Voort. We meet Captain Sava and the crew of the Aquarius and learn something about the Empire in which they live. 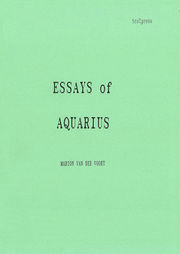 cover of Essays of Aquarius

Bill Hupe's catalog listing says it was "rejected by publishers because of its likeness to Star Trek."

From an ad in 1991: "The adventures of Captain Bill Sava, First Officer Radin, and Dr. Teddy Bhaer of the Aquarius. This is not a Star Trek zine."

This is a story with a difference, and well worth reading, Although not Star Trek, there are many points of reference, and above all the same spirit of adventure, the closeness of the main characters and for me the same important insight into Human strengths and weaknesses, It is set in a universe where Earth is a member of an Empire and the Navy runs a fleet of twelve ships named after the signs of the Zodiac. Captain Bill Sava is give the Aquarius and his friend Teddy Bhaer is made senior ship's surgeon. Although I have a soft spot for Pooh, Paddington and Rupert, it is not Teddy but the Number One who is the most satisfying character for me. Radin is half Salin, from the Imperial House, a race feared and little known, and half Human. His former Captain described him as follows: "One ear moving is a smile, both a grin; if they curl down he's worried, if they stand out, duck!" I'd not have to duck too far, since Radin is over 6 foot tall and a gentleman to boot! This book covers the early adventures from a first diplomatic mission that turns out to be anything but diplomatic and takes over three months to solve, to a visit to the Captain's home on Earth. You'll recognise some of the people, from busybody to retired gentleman, but there'll be some surprises including a game of crazy golf and a kidnapping. Later, Radin almost dies of starvation in a Human hospital before Imperial interference and action by Bill and Teddy come to his rescue, The Admiral comes out on the lasing side in the ensuing verbal battle. The book culminates in the ship being vislted by Her Royal Highness. You'll have to read the story to find out the significance of the last! [1]