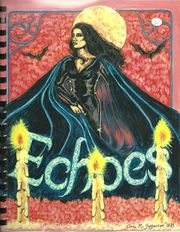 "ECHOES stares at you with one of the most stunning multi-color covers yet (by Cindy M. Jorgensen) superbly reproduced and protected by a clinging transparent cover. A darkly dressed woman encircles her enormous black cape around herself, onto which the zine's name is boldly inscribed. Three lit candles stand before her; two bats flit behind her. Her thickly drawn, distinctive face is turned away from the full moon behind her." -- from the review below

A second issue was proposed in 1992, but it was never published. Submission reguest: "Seeking romantic, sensual stories that deal with Barnabas' relationships with any of the following women: Victoria Winters, Josette DuPres, Angelique Bouchard, Maggie Evans or Dr. Julia Hoffman. Artists, please send xerox samples of your work. Writing and art can be up to an "R" rating. When submitting, if it's not obvious from your story, please let me know if the story is in the "original" or "1991" universes. This way, if the story is illustrated, the characters will appear as you envision them." 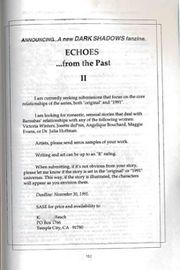 the proposed second issue, flyer printed in The World of Dark Shadows #57/58

An ad in On the Double #23 mistakenly titled this proposed second issue "Echoes of the Past II."

ECHOES stares at you with one of the most stunning multi-color covers yet (by Cindy M. Jorgensen) superbly reproduced and protected by a clinging transparent cover. A darkly dressed woman encircles her enormous black cape around herself, onto which the zine's name is boldly inscribed. Three lit candles stand before her; two bats flit behind her. Her thickly drawn, distinctive face is turned away from the full moon behind her. This spiral-bound zine has good reproduction, with some drastic differences in typeface from story to story. Yet all are neat and readable. A few stories have reduced type. "Tempest," by Lori Paige, is an extremely poignant story about Isaiah Collins, a lonely, desperate man who bargains with Angelique for a magical box that will transport to him the woman of his dreams. The woman turns out to be Julia Hoffman, who suddenly pops out of a costume party at Collinwood and materializes into Isaiah's house in 1909. Despite a few lapses in point of view, and a sometimes confusing sequence of actions, the plot moves quickly and engrossingly. Because the portrayal is both fresh and sensitive, it takes some extra effort on the reader's part to match this Julia with the one in the series, who really never got a fair shake. But effort in reading is not always a detriment, if the story is worth it. This one is, and the bittersweet ending makes the reader wish Julia could have stayed with Isaiah. Jane Lach's one illo serves as a sort of montage cover and is beautifully sweeping and romantic. "The Dark Will Find You," by Jean Graham, is a lovely vignette written from the point of view of the mad Millicent Collins about her descent into suicide. Graham's powerfully evocative writing really makes this memorable: "At times, when I walk slowly down this faded hall, my mind can hear the far-off strains of some grand waltz, wafting up from the grand parlor below, just as it once did, long ago, to accompany the agile feet of happy young celebrants. Always, the music fades swiftly. Nothing lively, nothing joyous, nothing good ever lived in this house for long . . ." Graham makes her suicide such a welcoming, positive, happy occasion that Millicent's always tragic figure becomes a sham. "David's Mission," by Michael V. Jameson, is a fun story about a mysterious cat that saves David Collins from a pack of wild dogs and leads him to a hidden cave to free the souls of black slaves who died trapped in the caverns centuries ago. "Passing On," by Carol Maschke, is a rather nondescript short-short about old Joshua Collins informing his adopted son Daniel about the real fate of his real son, Barnabas. "The Art of Vengeance," by Meghan Powel-Nivling, is a powerful, frustratingly short sequel to Night of Dark Shadows, that dreadful film of the early '70s wherein Tracy CollinslKate Jackson), now mad, gets her revenge on Angelique, who bewitched her husband Quentin and kept him as her lover. Literate writing, and quick, engrossing, successive plot developments make for a truly fascinating read, although the ending is disappointingly unoriginal. This is something that should have been expanded; a good, meaty story could easily be written as a sequel to NIGHT OF DS. Dave Billman's one illo has strong depth and background, not to mention a strikingly easy, yet detailed, style. "Masquerade," by Pam Wissinger, is an excruciatingly dull, meandering, repetitive 'story' about Maggie Evans' imprisonment by Barnabas. It has a sort of annoying 'stream of consciousness' style (with none of that style's attributes) that has the reader plowing through over-long sequences of commiseration and an escape attempt, and the ever-present ". . ." that appear much too frequently and lessen the impact. Typos abound, the dialogue is wholly unconvincing and often embarrassing, points of view are switched frequently in the middle of a scene, and general confusion reigns. This would have made a palatable 3-or 4-page vignette, not a 14-page chore. Anne Marie Erental's one intro "cover" illo to the story is a lovely montage of Maggie, Josette, and Barnabas, with an attractively free and smooth style. "Shadowplay," by Melody C., is a rather depressing, but effective, vignette about the grown David Collins, who is still trapped his childhood and put in an institution. The last paragragh is particularly provocative. "Going Home," by Virginia Waldron, is the best and longest piece. It begins with Willie Loomis' return home from the asylum (yes, another one - I told you the Collins family was cursed). This beginning, from Willie's point of view, grabs you instantly. The plot concerns mysterious vampire killings at Collinwood, for which Willie and Barnabas (now cured and married to Maggie) are being blamed. The beginning section is so strong that the reader feels a little cheated and lost when Willie fades slightly into the background and other characters become more prominent. Willie should have been kept in the narrative's fore. Then, too, the beginning concentrates mostly on Willie's character, whereas the rest of the story concentrates on the action. A few switches in point of view in the middle of scenes, a rather one-dimensional, cliched villain, and a frustrating series-like portrayal of Maggie (weak, dense, and generally cardboard) are the major complaints I have. But it's nicely paced, with a good poignant ending. Again, no inner illos, just another montage cover, with fine detail and depth, stunningly drawn by Anne Marie Erental.[1]