EFP is possibly the largest Italian-language fic archive. It hosts both fanfic and original writing.

Several published Italian authors have started by writing their fanfictions on EFP, such as "CaskaLangley" Eleonora Caruso and "Savannah" Virginia De Winter.

EFP was born from a personal page dedicated to Neon Genesis Evangelion called "Erika's NGE Page", hosting fanfics from Erika and other Italian authors, as well as translations, in its section "Erika's Fanfiction Page", manually uploaded by the webmaster and later expanded starting to host fanfics of various other works. It soon started to become too big to manually upload every fic, so, trying to emulate fanfiction.net's automated system, a new website was created and EFP was born. A big surge in users came in 2004 with the growing userbase of the Harry Potter fandom and with it a lowering of the userbase's median age and several complaints from concerned parents who found on the website non-con, incest, and violent fics. Erika, after the complaints, was forced to put more restrictive rules and restrict Explicit stories only to registered users and limit certain adult themes. [1]

EFP Uses a rating system similar to the one used in Italian television, with colors: Green, Yellow, Orange and Red. 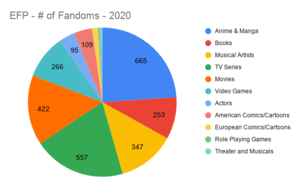 A breakdown of the types of fandoms on EFP in 2020 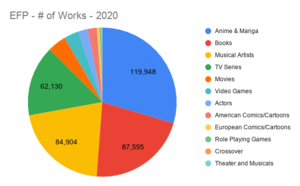 A breakdown of works by fandom type on EFP in 2020

EFP features both a large number of anime and manga fandoms and a large quantity of works in those fandoms. One Direction and Harry Potter are also popular. Overall, EFP features 2,776 fandom sections out of which 2,773 contain fics. There is also a section for crossovers.

One distinctive feature of EFP is that it splits comics and cartoons into three media types, adding a European Comics/Cartoons section to the American comics/cartoons and anime/manga sections common on English-language archives. This section contains fandoms such as Miraculous Ladybug, Winx, Altri, W.i.t.c.h., Huntik, Angel's friends, and Code Lyoko.

The original works section is distinctive for its use of the Italian genre term 'giallo'. From Wikipedia: "In the Italian language, giallo is a broad term that can be translated as "crime novel" including any literary genre involving crime and mystery, with all its sub-genres such as crime fiction, detective story, murder mystery or thriller-horror."[2]

Examples of popular fandoms on EFP include:

EFP has rules both about things that could get the site in legal trouble and about matters of taste. Overall, the rules are trying to allow art, even art with heavy and graphic topics but avoid pure erotica/porn:

Descriptions of sex scenes, even very extreme ones, are not forbidden, as long as vulgarity is avoided.[3]

Adult stories are locked and can only be accessed by people with an account who have marked themselves as adults.

The site does not consider interview or chatlog-style fic to count as proper stories. Asking readers to vote on future developments in the reviews is prohibited.

The site strongly suggests warning for spoilers, not doing your html in MS Word, and putting a disclaimer at the top of stories. For RPF, disclaimers are mandatory.

Translators must make a different account for every author they translate.

Italian Fandom Meta | Most Popular Types of Pairings on EFP vs. AO3 [in English on Tumblr] and [in Italian on AO3].