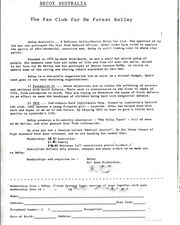 This fan club was formed by members of Aussietrek in Sydney. It moved operations to Adelaide in 1984 and closed in 1995.

It had a Dr McCoy focus and published a newsletter, The McCoy Tapes, and the fanzine, Medical Journal.