Deadly Maneuvers is a gen A-Team 124-page anthology that features stories of a "serious" or more "adult" tone than the fun & action style of Plans, Scams and Vans. The art is by Sockii.

From the website: "This 'zine is also available electronically for a shareware fee. You may download and copy the electronic version, but please remember that we are asking for a shareware fee of $2 for each copy. This shareware fee helps us with production costs for the print version, necessary correspondance to authors and contributor's copies, and also helps pull us out of the red on publications where difficulties have made the publication expenditures higher than anticipated. We make the electonic version available to encourage and help people on limited budgets afford to read and enjoy fanzines, and give people who generally only read net-fic a chance to find edited, high- quality, illustrated work."

Deadly Maneuvers 1 was published in July 1997 and contains 130 pages. 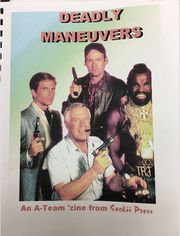 Least Favorite: (1) tried, but couldn't pick a least favorite because The stories are all so Good! (2) Honorable Enemies because Just didn't like it. (3) Genesis because I don't think it was developed as fully as it could have been. (4) It's Not Always Easy Being the A-Team because I think that that any of them not just Face could have been raped.

Other comments: (1) THE ARTWORK!!! The four sketches of the guys - WOW!! These are sketches- right? Beautiful, each and everyone. Hannibal looked a little young, but nothing wrong with that. BA, oh my, if Mr. T saw it, he'd probably want to snatch it right up. Sockii,if you really did these four sketches, it's just not fair. I can't even trace half that good. C O N G R A D U L A T I O N S  !!!!!!

(2) I am totally thrilled with almost every story in this zine! (3) Overall, I think this was one of the most consistent zines I've ever read. And I loved the artwork - the photos were terrific! And the cover was

Deadly Maneuvers 2 was published in August 1998 and contains 120 pages. The publisher says it is a "strong R" but not erotica. 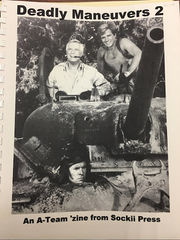