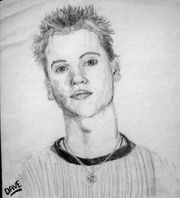 Portrait of Dave by Amy VanHym (1999).
Dave Moffatt (born 1984) is a musician and yoga instructor originally from Vancouver, British Columbia, Canada. He is best known for his role as keyboardist and singer for The Moffatts, a band he was in with his three brothers.

The Moffatts' breakup was largely due to Dave leaving the band. Some time later, rumors began to circulate that he was gay (what role this played in the breakup is unknown); these rumors were all but confirmed when he posed for a series of highly suggestive photographs for a website called Toxic Boy.[1] In 2006, he auditioned for Canadian Idol but did not advance very far. He has released some solo music, worked as a DJ in a gay/lesbian club in Toronto and done some theatre; currently, teaching yoga is his main focus.

Dave is a fraternal triplet to Bob and Clint.

Many fanon portrayals of Dave were jossed by his coming out. He was most commonly slashed with Zac Hanson thanks to the popularity of Devil Angel. He was also likely to be paired with any of his own brothers.