The Curse of the Black Opal

From Fanlore
(Redirected from Curse of Black Opal)
Jump to: navigation, search 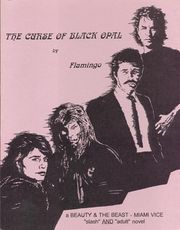 The Curse of the Black Opal is a slash and het crossover 160-page novel by Flamingo. The cover artist is uncredited in the zine but appears to be Alayne.

"This novel contains explicit depictions of both homosexual and heterosexual intimacy. You must be 18 years of age to order. Age statement required!"

Part of this story was printed in the eighth issue of Dyad in 1991.

Thank you to Dovya who offered to publish this behemoth on the strength of two chapters. I'd always imaged this odd story would spend its life as a dog-eared manuscript being passed around to a select few. You were its advocate when everyone else was saying, "a crossover between what two universes?

Sonny Crockett and Ricardo Tubbs have gotten close to the dangerous arms merchants and lived to talk about it. Now, the Black Opal is in New York, storing caches of volatile weapons in the labyrinthine tunnels that twist below that city's bustling surface - tunnels that hold more secrets than even the Black Opal knows.District Attorney lawyers Joe Maxwell and Cathy Chandler need Crockett and Tubbs. But Sonny and Rico need a front man - and only their lieutenant, Martin Castillo, could play that role. The case is further complicated by the awkward triangle that has recently developed among the three Miami detectives, with Crockett at the center and Tubbs and Castillo at odd angles to each other. Even as the three struggle to balance their work and their passion, Martin Castillo is forced to keep his past a secret, a secret that threatens to tear their tenuous triangle apart - because his past centers around the tunnels of New York, Jack Gretsky, Elliot Burch and someone named Vincent. Now Castillo must reconcile his relationship with Sonny and Rico - and somehow guide the strange being he calls brother and Catherine Chandler along the dangerous route of their passion. Can he ever reconcile the man he is with the expectations of the patriarch who raised him, the man he has always called Father? Will he successfully prevent the Black Opal from destroying the island of Manhattan?

Crockett and Tubbs are astounded to discover that Castillo's childhood was nothing like they had imagined, but then, who could have imagined an entire community living beneath New York City, or that Castillo had grown up there? Or that he was good friends with a fierce-looking, but gentle leonine man named Vincent? And that Martin had brought his best two detectives there for a particular reason...

Finally, after 5 years, the novel is complete and will be available fall 1995. The "/" element is strictly VICE, the BEAUTY AND THE BEAST element is gorgeously passionate! Martin Castillo must return to the tunnels where he grew up, to save Sonny Crockett who has been kidnapped by "The Black Widow," the leader of a gang of terrorists Assistant District Attorney Catherine Chandler is working on bringing down. Adventure, suspense, intrigue and lots and lots of romance and lust!

From another issue of Media Monitor:

The criminal organizational known as the Black Opal has moved cached of weapons into the tunnels below New York. Only Sonny Crockett, Rico Tubb, and Martin Castillo can help lawyers Joe Maxwell and Cathy Chandler defeat the gang. But what secrets from Castillo's past stand in his way? And who is this person Castillo calls brother?

First, I want to express my extreme and undying admiration for Flamingo. She is one persistent, dedicated, hard-working lady! Despite other writing commitments and sick baby birds, despite cruel weather and long years of working on this novel, she has not only persevered with the project, but triumphed in the beauty of the final product.

This is one superbly excellent story.

Two miracles were produced by Flamingo in this novel: 1 -Once again, she made me like Rico Tubbs (NOT an easy thing to do!) and, 2-she turned the usually simpering Catherine Chandler into a strong, independent, admirable, likeable woman who can stand up to anyone, even Father, Martin Castillo and Sonny Crockett! To my mind, there isn't a single whine or whimper that passes Catherine's lips in this novel; a rarity in B&B fandom, indeed!

For those of you unfamiliar with either BEAUTY & THE BEAST or MIAMI VICE, Flamingo has explained and described both universes in such detail that you'll slip right into the visuals with no difficulty. But for those who want faces to put to the characters you may not know, a list of who played whom is below [in a cast list].

I hope you all enjoy THE CURSE OF BLACK OPAL. I've read it over and over and still am not tired of a single moment of it. I certainly hope, when you're finished, you can say the same!

For those of you unfamiliar with the MIAMI VICE universe, you should know that the major significance of the episode BUSHIDO is the reappearance of Jack Gretsky. Dean Stockwell plays this magnetic character for perhaps ten minutes, but that brief appearance has affected a great deal of fan writing — especially mine. So, Jack is indeed alive, and a reunion between Martin Castillo and him does occur. A revisiting of that episode from the standpoint of this novel may happen, as may several other spin-off stories, such as:

What does happen on that boat right at the end of this novel? (The very idea makes me tremble.)

How do the Miami Vice characters react to the death of Catherine Chandler?

Is Elliot Burch really dead — or might he show up in Miami to take Martin up on the offer of shelter he'd made so many years ago? And how will Sonny feel about that?

How does Sonny's marriage to Caitlin Davis affect his triad with Rico and Martin?

After Sonny's breakdown and amnesia, and his crime spree as Sonny Burnett, can Martin, Rico and Sonny possibly resume their relationship?

And, at the end of the Vice episode BORRASCA, does Reese try to live up to his promise to seek revenge against Castillo by going after Sonny who -having no idea of the events in Miami — is working on a court case in Fort Lauderdale?

Lotta stuff to work with, pal, hard to say where a body could begin. But, I'll be thinkin' about it — how 'bout you?

I can feel it coming in the air tonight.... - Phil Collins

As I said in a previous post, I got this zine nine weeks after sending the check (which was cashed quickly afterwards) and three weeks after sending an SASE asking if there was a problem. There was no note explaining *why* it took so long or even noting it. This is not an isolated problem I've had with this press and while I will probably continue to purchase zines from this press, I'd be inclined to at least warn others of these problems.

The layout of this zine is much better than that of the DYADs, which are also published by MKASHEF. The zine is perfect bound (which while I don't tend to like, seems to have at least been done fairly well). It's app. 160pp and is double columned. There is very little white space and the words a very dense on the page. For those of you who like a good word number/cost ratio, this is definitely seems worth it, though I do think some of the spacing breaks between sections seem kind of odd.

Overall, the zine is yet another solid entry from Flamingo. She's an excellent writer who does great Crockett/Castillo and wonderfully intense sex scenes. (And for those Tubbs fans, this is actually a Castillo/Crockett/Tubbs story.) While this is not her best work, it is still a very well done story, enhanced by the fact that she made the unusual crossover aspects of it work.

The main idea hinges on the fact that Castillo, who has a mysterious past in the show, is actually from the Tunnels, along with Jack Gretsky. This is an interesting idea by itself and makes sense in the way she presents it. Both of the universes really come together when a group that Sonny and Tubbs are trying to bring down, Black Opal, shift towards NYC. The novel and Our Heroes then move to NYC where they immediately have to work with Catherine Chandler, assistant DA.

Quite a lot of the novel deals with Castillo's past, much of which, even with Jack not being there, is still wrapped up around him. It deals with his history in the Tunnels, what he did after he left and finally, his brief return to NYC after Jack's and May Ying's 'deaths' in Cambodia. This last part is actually the least believable for me, the fact that this brings in a separate connection with B&tB's Elliot Burch separate from his involvement with the others, but since she made several very good observations involving this and the very, um, interesting scenes that go along with it, I'm willing to suspend disbelief.

All in all, I highly recommend it. It's a great read, even if not one of her best. It's certainly not anywhere near as intense as PHONE SEX, but I know some people might prefer that. My one real complaint about this is the fact that the ending is somewhat weak, something that was also a problem (basically, only) with PHONE SEX.

On the other hand, anyone who could make me like Ricardo Tubbs, much less not completely resent his existance in a relationship with Castillo and Corckett, has to be damned good.  :-) [1]