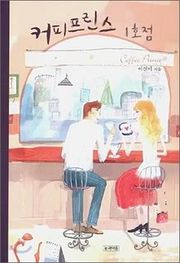 Cover of the Coffee Prince novel

"A girl frequently mistaken as a boy is hired to play a man's gay lover in order to get his matchmaking grandma off his back. Sexy, romantic, funny, and heartbreaking by turns. One of THE big kdramas."[2]

The series touches on issues of trans and gay characters without ever truly depicting either. There are scenes of Eun Chan binding to appear more masculine and she makes an effort to speak and move like a man, but she is never represented as a transman. Similarly, even though Han Kyul believes Eun Chan is a man while clearly falling in love with her, the relationship is always understood by the audience and Eun Chan to be heterosexual. These themes of sexuality and gender identity make Coffee Prince a perfect fit for a lot of Western media fans and the series has had a lot of crossover interest. The series is often the first suggestion by kdrama fans when a newbie asks where to start watching

In her review of the series, thefourthvine recounts a discussion she had about Eun Chan's gender identity:

I said the actress who played Eun Chan did a fantastic job showing discomfort with femininity, using masculine body language, all of that.

In short, even people who don't know the word genderqueer and affirmatively state that you have to be either a boy or a girl look at Eun Chan and decide she's not a girl pretending to be a boy, but rather a person being who she is. (I say she, by the way, because it's what she says. Or at least what the subtitles say she says.) [3]

The series generated a lot of dicussion in journal-based fandom, [4] but produced very little fanworks outside of icons and picspams. However, a Google search for Coffee Prince MV gets a lot of hits for MVs made by fans from all over the world. (There was probably a lot of activity at Soompi - anyone want to investigate?) Coffee Prince has been a Yuletide fandom, and had several fanworks, including fanart and icons, posted to the AO3 for Dark Agenda's Kaleidoscope Fanwork Exchange.

A block of kdrama fans banded together to bid on popular reccer thefourthvine in the help_japan auction. Most contributors to the kdrama review fund were interested in seeing TFV review an episode of Coffee Prince.[5][6] Thefourthvine posted her review of the first episode, and viewed the series positively overall.[3]